The city of Grass Valley is the largest city in the western region of Nevada County, California, United States. Situated at roughly 2,500 feet (760 m) elevation in the western foothills of the Sierra Nevada mountain range, this historic northern Gold Country city is 57 miles (92 km) by car from the state capitol in Sacramento, 64 miles (103 km) from Sacramento International Airport, 88 miles (142 km) west of Reno, Nevada, and 177 miles (285 km) northeast of San Jose. As of the 2010 United States Census, its population was 12,860. 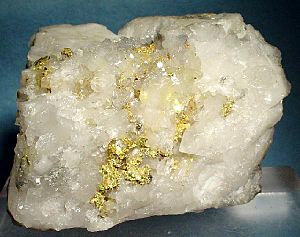 Gold in quartz, from one of the old Grass Valley mines

Grass Valley, which was originally known as Boston Ravine and later officially named Centerville, dates from the California Gold Rush, as does nearby Nevada City. When a post office was established in 1851, it was renamed Grass Valley the following year for unknown reasons. The town incorporated in 1860.

Grass Valley is the location of the Empire Mine and North Star Mine, two of the richest mines in California. George Starr, manager of the Empire Mine, and William Bowers Bourn II, the mine owner, donated mine property which became Memorial Park.

Many of those who came to settle in Grass Valley were tin miners from Cornwall, England. They were attracted to the California gold fields because the same skills needed for deep tin mining were needed for hardrock (deep) gold mining. Many of them specialized in pumping the water out of very deep mining shafts. This followed the disastrous fall in tin prices as large alluvial deposits began to be exploited elsewhere.

Grass Valley still holds on to its Cornish heritage, with events such as its annual Cornish Christmas and St Piran's Day celebrations. Pasties are a local favorite dish with a few restaurants in town specializing in recipes handed down from the original immigrant generation. Grass Valley is also twinned with the Cornish town of Bodmin, UK.

There was formerly a Roman Catholic diocese of Grass Valley.

According to the United States Census Bureau, the city has a total area of 4.7 square miles (12 km2), all of it land.

A variety of igneous and metamorphic rock supports Grass Valley. Granitic rock such as quartz diorite underlies the downtown core and extends south along Highway 49. Metavolcanic rock and diabase underlie areas around the granitic zone. Neighborhoods around Nevada County Golf Course and Sierra Nevada Memorial Hospital are underlain by ultramafic rock which supports infertile soils of the Dubakella series. Here the vegetation is not as luxuriant as one would expect from the high average annual precipitation, and forested areas are often dominated by several species of oaks and the crooked, thin-crowned gray pine. Straight, dense ponderosa pine inhabitants the more fertile soils which include Musick series on granitic rock and Sites series on mafic or metamorphic rock.

Grass Valley has a hot-summer Mediterranean climate (Köppen Csa) with warm to hot, dry summers and wet, cool, rainy winters. Summer is very dry, but thunderstorms may occur. The winter rains contribute to a heavy fuel-loading of brush and grass, which dry out during the summer, posing a wildfire hazard. Snow occurs at times. 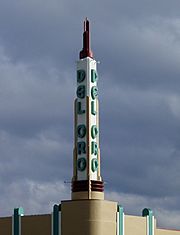 The iconic spire of the Del Oro Theatre

Grass Valley is at the intersection of State Route 49 and State Route 20. Public transportation is served by the Gold Country Stage [1] and is limited to the urban areas. 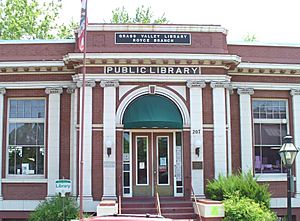 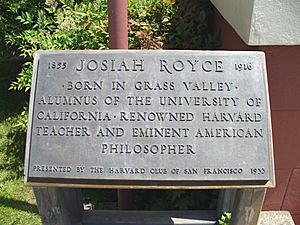 The inscription to Royce at the library

All content from Kiddle encyclopedia articles (including the article images and facts) can be freely used under Attribution-ShareAlike license, unless stated otherwise. Cite this article:
Grass Valley, California Facts for Kids. Kiddle Encyclopedia.