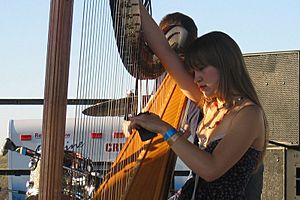 Joanna Newsom is an indie singer and a harpist. She was born in Nevada City, California in 1982.

Newsom was not allowed to watch television or listen to the radio when she was a child. She went to a Waldorf school. After high school Newsom studied composition and creative writing at Mills College in Oakland, California.

Newsom's first album The Milk-Eyed Mender was released by Drag City on the 23rd of February 2003. Pitchfork gave the album a score of 8 out of 10. Newsom's second album Ys was given a score of 9.4 out of 10.

All content from Kiddle encyclopedia articles (including the article images and facts) can be freely used under Attribution-ShareAlike license, unless stated otherwise. Cite this article:
Joanna Newsom Facts for Kids. Kiddle Encyclopedia.