The original building, constructed in 1852 by Stephen and Clara Smith, was a saloon, the Golden Gate Saloon. The following year, a single-story annex, the Exchange Hotel, was added at the back of the saloon. The fire of 1855 burned down the saloon, but it was rebuilt with fieldstone and a brick facade. The Exchange Hotel was caught in a fire in 1862, after which it was renovated into a two-story structure. In 1879, it was named the Holbrooke Hotel after the owner, D. P. Holbrooke. The hotel continues to be privately owned.

The hotel has 27 rooms and is 19,400 square feet (1,800 m2) in size. The hotel includes a restaurant whose chef gets mushrooms and wild lettuce from local State Park Rangers. The interior includes copper clad walls, mahogany wood, Italian alabaster, and marble. It is furnished with globe chandeliers, green library lamps, and clawfoot bathtubs. The bar in the saloon was shipped around Cape Horn. The hotel was featured on a September 2013 episode of Hotel Impossible and an April 2016 episode of The Dead Files. 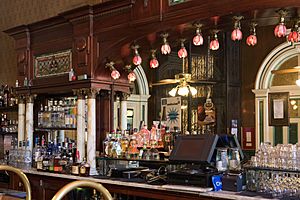 Formerly known as the Golden Gate Saloon, the bar at the Holbrooke Hotel has been in continuous operation since 1852

The Nevada County hotel became a California Historical Landmark, #914, on March 18, 1978. Another historical marker was placed on the building on September 25, 1965 by E Clampus Vitus.

All content from Kiddle encyclopedia articles (including the article images and facts) can be freely used under Attribution-ShareAlike license, unless stated otherwise. Cite this article:
Holbrooke Hotel Facts for Kids. Kiddle Encyclopedia.