Crabtree was born in New York City and raised in the gold mining hills of Northern California. There she rose to fame as a child performer. Crabtree became one of the wealthiest and most beloved American entertainers of the late 19th century. From her beginnings as a 6-year-old until her retirement at age 45, she entertained and was named "The Nation's Darling". Her life story was filmed as Golden Girl (1951), starring Mitzi Gaynor.

Charlotte Mignon Crabtree was born in New York City on November 7, 1847. Her father, John Ashworth Crabtree, a book seller, left for San Francisco in 1851 to join those seeking fortune in the California Gold Rush. Crabtree and her mother, Mary Ann (née Livesey) Crabtree, followed two years later, joining John in the boomtown of Grass Valley. While in Grass Valley, the Crabtrees ran a boarding house. Lotta soon attracted the attention of a neighbor, the dancer and actress Lola Montez, who encouraged Lotta's enthusiasm for performing.

The Crabtrees moved again and set up another boarding house, this time in Rabbit Creek, 40 miles north of Grass Valley. Soon after, Crabtree made her first professional appearance at a tavern in Rabbit Creek with support from the Robinson Family of performers. She began touring throughout the California mining camps making a name for herself as a dancer, singer, and banjo player.

In 1856, the family moved back to San Francisco. Rowena Granice Steele had established The Gaieties, Temple of Mirth and Song theater and saloon in that year, and Crabtree, her protege, was one of the early performers at that venue. By 1859, she had become "Miss Lotta, the San Francisco Favorite". Crabtree's mother served as her manager and collected all of Lotta's earnings in gold, carrying it in a large leather bag. When this became too heavy, it was transferred to a steamer trunk.

With the silver discovery in Nevada beginning in 1859, Crabtree became a recurring star after first appearing there in 1863. The embodiment of fun and frolic, Crabtree mugged for the audience, twisted her finger in her dimple, stuffed coins thrown on stage to her into the tops of her stockings, and overall personified the happy scamp. 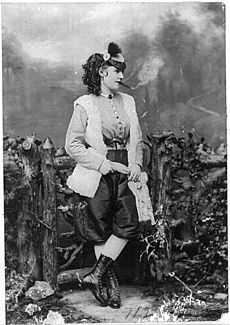 Having made a name for herself in California, in 1863 Crabtree left to tour the East Coast, where she began acting in plays, in theaters, such as The Old Curiosity Shop, Uncle Tom's Cabin and Little Nell and the Marchioness. With her petite size, she became a favorite for her portrayals of children. The late 1860s would see the "Lotta Polka" and "Lotta Gallup" as quite the rage in America. At age 20 she was a national star. By 1875, Crabtree was touring the nation with her own theatrical company. She achieved the height of her success in the 1870s and 1880s.

The 1880s saw her perennially as the highest-paid actress in America, earning sums of up to $5,000 per week. Her mother Mary Ann was still managing Crabtree's affairs: booking plays, finding locations, and organizing troupes of actors. When the steamer trunk became too heavy, she invested Crabtree's earnings in local real estate, race horses and bonds. As well as investing, some of the money was used to support local charities (the Massachusetts Society for Aiding Discharged Prisoners – est. 1846 – still receives annual grants) and build fountains. Lotta's Fountain, the most famous of these fountains, still stands at the intersection of Market and Kearny streets in San Francisco, and is the site of meetings every April 18 marking the anniversary of the 1906 San Francisco earthquake. 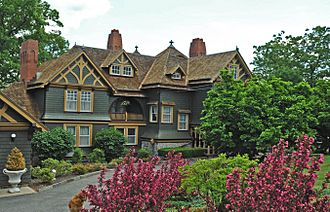 Crabtree traveled abroad with her mother and brothers. She learned French, visited museums and began painting. After her tour abroad, Crabtree returned to San Francisco where she played at the California Theatre, reprising her role in Little Nell and the Marchioness by John Bowen. Having missed her while she was away, the city responded warmly to her return and treated her like their very own star.

In 1885, Crabtree's mother had an 18-room summer cottage built in the Breslin Park section of Mount Arlington, New Jersey, on the shores of Lake Hopatcong. Named Attol Tryst (Lotta spelled backward), the house was designed by noted architect Frank Furness. Crabtree gave parties, rode horses, and pursued her painting. It stands today and in recent years has been restored.

Crabtree was forced to retire as a result of a fall onstage in Wilmington, Delaware, in May 1889. After recovering in Lake Hopatcong, she attempted a comeback in 1891 and decided to retire permanently from the stage. She later resisted calls for a farewell tour. At age 45, she was the richest actress in America, the theater was changing and she got out at the top. She made one final appearance in 1915 for Lotta Crabtree Day in San Francisco at the Panama-Pacific Exposition.

While Crabtree apparently had her share of romance, her travel, lifestyle and mother made a long-term relationship difficult, and she never married. Following retirement, Crabtree traveled, painted (including studying at Paris in 1912) and was active in charitable work. Late in her life, Crabtree moved to Massachusetts and was owner of acreage in the southern part of the Squantum section of Quincy, immediately south of Boston, Massachusetts. It is said to have been purchased for the benefit and health of her brother (Ashworth) and for their horses. Much of the land was sold as house lots in the 1930s/40s. Children who walked to school through her land in those days often passed by two small markers of local granite set into the ground, engraved "Ruby Royal" and "Sonoma Girl" – two of the Crabtrees' horses. The stone for Ruby still exists on Livesey Road. Local street names include Ashworth Road, Livesey Road, Sonoma Road, and the shoreline Crabtree Road. Ashworth was a family surname, as was Livesey. Further information may be available through the Quincy, Massachusetts Historical Society. 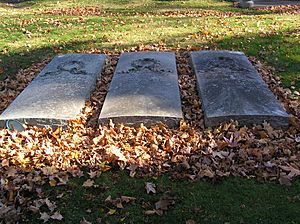 The gravesite of Lotta Crabtree in Woodlawn Cemetery

Crabtree spent the last 15 years of her life at the Brewster Hotel in Boston, which she had purchased in 1909. She died there on September 25, 1924, at age 76 from undisclosed causes. In her obituary, the New York Times called her the "eternal child". She was described by critics as mischievous, unpredictable, impulsive, rattlebrained, teasing, piquant, rollicking, cheerful and devilish. She was interred at the Woodlawn Cemetery in Bronx, New York. She left an estate of some $4 million in a charitable trust for such causes as veterans, aging actors and animals. The estate ran into complications when a number of people unsuccessfully contested the will. The trust still exists today.

All content from Kiddle encyclopedia articles (including the article images and facts) can be freely used under Attribution-ShareAlike license, unless stated otherwise. Cite this article:
Lotta Crabtree Facts for Kids. Kiddle Encyclopedia.