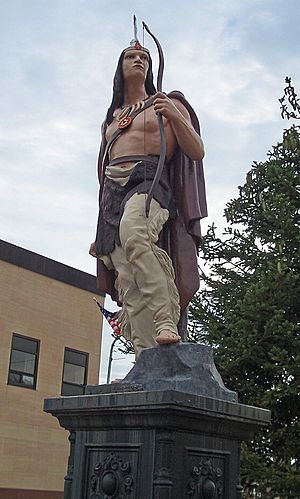 Ishpeming is a city in Marquette County in the Upper Peninsula of the U.S. state of Michigan. The population was 6,470 at the 2010 census, less than it was in the 1950s and 1960s when the iron ore mines employed more workers. A statue of a Native American figure, erected in 1884 in the small town square, is referred to as "Old Ish".

Ishpeming Township is located to the northwest of the city but is administratively autonomous. Ishpeming is considered the birthplace of organized skiing in the United States and is the home to the National Ski Hall of Fame. The city was also prominently featured in the 2010 documentary Catfish.

The name Ishpeming comes from the Ojibwe word ishpiming, meaning "above", "in the air" or "on high". 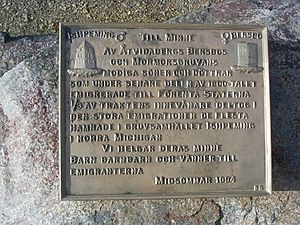 This climatic region is typified by large seasonal temperature differences, with warm to hot (and often humid) summers and cold (sometimes severely cold) winters. According to the Köppen Climate Classification system, Ishpeming has a humid continental climate, abbreviated "Dfb" on climate maps.

In the adjacent Ishpeming Township, the NICE Community School District consists of

INN (Ishpeming-Negaunee-NICE) Community School is an alternative high school located in Ishpeming in a church on Pine Street that consists of about 30 students as of March 2019.

All content from Kiddle encyclopedia articles (including the article images and facts) can be freely used under Attribution-ShareAlike license, unless stated otherwise. Cite this article:
Ishpeming, Michigan Facts for Kids. Kiddle Encyclopedia.