Wakefield is a city in Gogebic County in the U.S. state of Michigan. The population was 1,851 at the 2010 census.

Wakefield is located in the western Upper Peninsula about 10 miles (16 km) east of the Wisconsin border. The city is mostly surrounded by Wakefield Township, but the two are administered autonomously. U.S. Route 2 passes through the city, and M-28 has its western terminus in the city.

It is home to Sunday Lake, Indianhead Mountain Resort, Gogebic County Medical Care Facility, and Gogebic County Community Mental Health Authority. Once a mining town, the economy is now based upon the forest industry, goods and services, and tourism.

George Mix Wakefield, born February 6, 1839, in Henderson, New York, a son of James Patterson Wakefield and Hannah B. Hall, had the town site of Wakefield platted in May 1886; the general location was already being referred to as "Wakefield" as early as the fall of 1884. His parents moved their family to Waukesha County, Wisconsin in October 1844. Mr. Wakefield became interested in logging and real estate and acquired vast tracts of land in the western Upper Peninsula of Michigan in the 1870s and 1880s. Together with various other capitalists he built sawmills and logged the pine forests of the area, and later became involved in mineral exploration. He was one of the parties who held interests in the mineral rights to the Sunday Lake mine, as well as a few nearby properties.

Mr. Wakefield moved to Milwaukee, Wisconsin in 1879 and established a real estate business, dealing in timber and mineral lands in Michigan, Wisconsin, Texas, and Alaska. He was secretary-treasurer of the Ontonagon River Improvement and Boom Company, organized in 1880. They made it possible to float logs out to Lake Superior and built a sawmill on an island near the mouth of the Ontonagon River in Ontonagon, Michigan.

The G. M. Wakefield Mineral Land Company was formed in Milwaukee, Wisconsin on September 18, 1899, for the purpose of dealing in mineral lands, timber, agricultural lands, and real estate. George M. Wakefield, his wife and their son Vernon T. Wakefield were the stockholders with a capital stock of $50,000 divided into 500 shares. Most of the land held was in Township 47 North, between Wakefield and Lake Gogebic. Mr. Wakefield was also a major stockholder in the Beacon, Continental, Cosmos, International, and Summit mineral land companies.

The Wakefield ancestry is traced back to John Wakefield, who was born about 1614, probably in Gravesend, County Kent, England and immigrated to Virginia aboard the "America" in June 1635, along with his brothers Richard Wakefield and Thomas Wakefield. John Wakefield eventually settled at Martha’s Vineyard, Massachusetts. 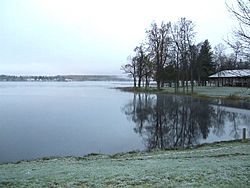 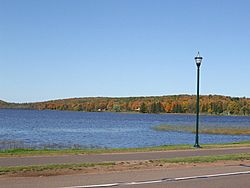 The founding of Wakefield and much of its early history was based upon the discovery of iron ore on the east end of Sunday Lake by George A. Fay in 1881. Upon its discovery, several mining companies rushed to the area and many mines opened. Villages such as Plymouth, Pike, Castile, and Comet got their names from these iron mines. The first mines in Wakefield were the Sunday Lake, Iron Chief, and the Brotherton. According to the Gogebic Range Directory of 1888, the output of these mines in 1886 was as follows: Sunday Lake, 13,00 tons; Iron Chief, 9,584 tons, and the Brotherton, about 3,500 tons. 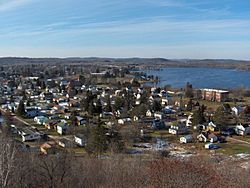 After the closure of the Sunday Lake Mine on February 16, 1961, the local economy shifted from one of mining to the forest industry, goods and services and tourism.

Logging had been a mainstay of the local economy since the early 1900s. In 1941, the county embarked upon a county forest project to demonstrate that with selective cutting, under proper management, forests could be perpetuated, of increasing value and quality. By 1956, the project included 45,604 acres (184.55 km2) out of the total of 703,102 acres (2,845.35 km2) in the county and Ottawa National Forest harvesting marked hardwoods, aspen, and conifer. In support of the local lumber industry, many successful lumber, trucking, equipment sales, and logging businesses have existed in Wakefield and many continue to do so today. They all support the larger industries of lumber and plywood mills located in Gogebic County and outlying areas.

After the local mining jobs were lost, many in the community began providing goods and services, which included restaurants, food markets, bakery, bars, gas stations, hardware stores, drug stores and other commerce that supports the needs of the community.

With an average of 156–240 in (400–610 cm) of annual snowfall, the city greatly benefits from winter tourism. Indianhead Mountain opened in 1959 and has grown to become a major tourist magnet in both winter and summer. Snowmobile trails, cross-country skiing trails, and ice fishing on Sunday Lake have also drawn many tourists to the city during the winter months. During the summer, hiking, camping, fishing, and on occasion American Power Boat Association boat races on Sunday Lake contribute to a growing local tourist industry. As a typical small town, many are drawn back to participate in the annual old-fashioned July 4 celebration. The week-long event includes softball tournaments, high school class reunions, homecoming church services, town picnic and concert at Eddy Park, a Sunday Lake run contest, Main Street parade, children's races, and fireworks display over Sunday Lake.

Severe storms struck the Gogebic Range during the late evening of July 11, 2016 and the early morning of July 12, 2016. The storm produced flash floods across the area and one confirmed EF0 tornado in nearby Bessemer Township. In particular, the city of Wakefield was struck with a thunderstorm with straight-line winds around 90 mph which downed numerous trees and power lines, turned over a camper trailer, and tore the roof off of a former ice rink along Sunday Lake. Following the storm, parts of the city remained without power for a considerable time before crews could restore power. 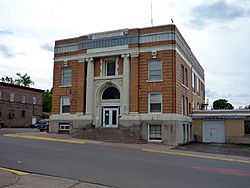 The City Hall is located at 509 Sunday Lake Street (Formerly the Father Daniel Hall). City departments include Water and Electric, Public Works, and Finance. The City Staff operate from the building and Department of Public Works garage which include:

On September 17, 2014, the City Council voted unanimously to approve a one-year Lease with Option to Purchase Agreement with the Roman Catholic Diocese of Marquette for Father Daniel Hall (FDH). That fall the old City Hall closed and the City government moved into FDH. Plans to repair or replace the old City Hall had been discussed for decades. The boilers and some bathrooms were not functioning, the exterior required extensive tuck-pointing and repair, and the building did not meet ADA standards. Many of the offices were in need of rewiring and required structural repairs. Many of the other areas were no longer utilized. As conditions deteriorated the cost of keeping the doors open increased year after year. Conversely, FDH had seen significant improvements. In 2013, the roof was replaced, and the boilers are functioning. All of the rooms are on one floor, and the entrance is handicap accessible, offering access to all residents. The new City Hall, now called the municipal building, was purchased in October 2015 for $101,899 using general funds.

The City Council consists of the Mayor, Mayor Pro Tem, and three council members who are elected for two-year terms.

Completed in 1924 on the south shore of Sunday Lake, the 52,000-square-foot (4,800 m2) Wakefield Memorial Building was the center of the community. At a cost of $400,000 it was dedicated to the youth who fought in World War I. It housed a banquet area, meeting rooms, an olympic size swimming pool, and a 1,200 seat movie theater with main floor and balcony seating. By the late 1950s after the local iron mines closed, the major tax base was lost and the city no longer had adequate funds to operate the Memorial Building. During the ensuing decades, other entities owned the building but little was done to sustain it. The harsh winters soon destroyed the roof and the building was soon structurally unsound and in a dilapidated state.

In July 2004, Marvin Suomi, a 1965 graduate of Wakefield High School purchased the Wakefield Memorial Building. Headed by Mr. Suomi, the Wakefield Memorial Building Foundation was established as a 501(c)(3) organization with the goal of constructing a new, smaller, energy efficient/sustainable building. Federal and state funding were dependent upon a series of environmental reviews and assessments by both the U.S. Department of Housing and Urban Development and the Michigan State Housing Development Authority. The State Historic Preservation Office did not want the old building torn down but after lengthy negotiations a consensus was reached by the project coordinator and shortly thereafter the City Council approved the demolition. By late spring 2010 the Michigan State Historic Preservation Office approved the archival records compiled of the memorial building and Wakefield City Hall. HUD then released $147,000 in federal funds that were used to pay for the demolition. Demolition of the old Memorial Building began on July 6, 2010, and was complete on August 28, 2010. Twelve stained-glass windows from the theater auditorium were salvaged for restoration and use in the new building design. In July 2011 the City Council in conjunction with the Wakefield Memorial Building Foundation, decided to remove a roughly 9,600-square-foot (890 m2) theater from the plans for a 34,000-square-foot (3,200 m2) building. The new building will function as a community center and house city offices, the city library, and a swimming pool. When the project is complete, the new building will be operated by the city and utilized by the entire community. It is currently unknown if or when the project will proceed.

The Wakefield Public Library was opened to the public on February 4, 1935. It was originally located on the second floor of the City Hall building on Sunday Lake Street. It is now located at 401 Hancock Street. The dream for the library dates back to Oct 17, 1934 when a group of local citizens concerned about the literary heritage of their community decided to take action. They felt that a measurement of the cultural concerns of a community could be made through the literary pursuits of its citizens. The city of Wakefield made its first appropriation of $1,000 to lay the groundwork of the fine community facility we enjoy today. The Wakefield Public Library serves the City and Township of Wakefield. With help from the "Friends of the Library" it has received some needed renovations. In 2005, the children's section was totally remodeled followed by the "teen section" in 2006.

Local newspapers and radio include:

There were 818 households, of which 20.7% had children under the age of 18 living with them, 42.3% were married couples living together, 8.6% had a female householder with no husband present, 4.4% had a male householder with no wife present, and 44.7% were non-families. 38.6% of all households were made up of individuals, and 18.4% had someone living alone who was 65 years of age or older. The average household size was 2.11 and the average family size was 2.72.

The population peaked in 1920 with the mining boom and has been in steady decline since.

All content from Kiddle encyclopedia articles (including the article images and facts) can be freely used under Attribution-ShareAlike license, unless stated otherwise. Cite this article:
Wakefield, Michigan Facts for Kids. Kiddle Encyclopedia.