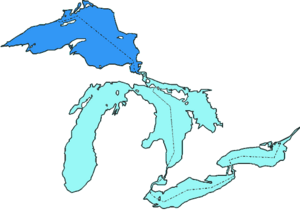 Lake Superior is a lake in Canada and the United States.

The Ojibwe Native Americans call it Gitchigume. Lake Superior is in between Ontario and Minnesota to the north and Wisconsin and Michigan in the south, and is the largest of North America's Great Lakes. It is the world's third largest lake, and the world's largest freshwater lake (by area). Its outlet is the St. Marys River to Lake Huron. The Soo Locks allow carrying large amounts of iron ore and other cargo to the other Great Lakes.

Over 80 species of fish live in Lake Superior.

All content from Kiddle encyclopedia articles (including the article images and facts) can be freely used under Attribution-ShareAlike license, unless stated otherwise. Cite this article:
Lake Superior Facts for Kids. Kiddle Encyclopedia.