The St. Marys River (French: rivière Sainte-Marie), sometimes written as the St. Mary's River, drains Lake Superior, starting at the end of Whitefish Bay and flowing 74.5 miles (119.9 km) southeast into Lake Huron, with a fall of 23 feet (7.0 m). For its entire length it is an international border, separating Michigan in the United States from Ontario, Canada. 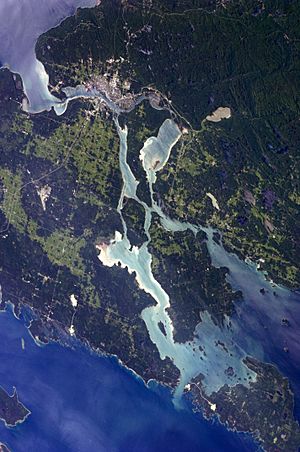 Before Europeans arrived, Ojibwe (Chippewa) Native Americans fished, traded, and maintained a portage around the rapids of the St. Marys River, which they referred to as Baawitigong, meaning "at the cascading rapids". French explorer Étienne Brûlé was the first European to travel up the rapids in about 1621. In 1641 Jesuit priests Isaac Jogues and Charles Raymbault ventured the same route as Brûlé, finding many Ojibwe at the rapids, and named it Sault Ste. Marie. Sault (Middle and early Modern French spelling of saut) means "jump"; hence, the secondary meaning "rapids" because the water 'jumps.'

Fort St. Joseph was built on the Canadian shore in 1796 to protect a trading post, and ensure continued British control of the area. The fort fulfilled its role in the War of 1812.

The first modern lock was completed in May 1855 by Erastus Corning's St. Mary's Falls Ship Canal Company, and was known as the "American Lock". Today, there are four parallel locks on the American side of the river, although only two are in regular use. The Soo Locks became part of the Great Lakes Waterway system in 1959.

Partially due to the American refusal of passage through the Soo Locks during the Wolseley Expedition, a Canadian Lock was built in 1895. The current Canadian Lock is used for recreational boats and is a National Historic Site of Canada.

During World War II, the Soo Locks and the St. Marys River waterway were heavily guarded by U.S. and Canadian forces coordinated by the U.S. Army's Central Defense Command. During the waterway's usable season from March through November, 90 percent of the United States' iron ore production for domestic use passed through it in 1939, making the waterway critical to maintaining war production. A battalion of infantry, stationed at nearby Fort Brady, provided security beginning just after the outbreak of the European war in September 1939; this was reduced to a company in mid-1940 and replaced by a military police battalion in May 1941. After Pearl Harbor in December 1941, fear of possible air or paratroop attacks by German forces led to a major expansion of defence measures. Scenarios envisioned included U-boats in Hudson Bay launching attack aircraft, and one-way bombing or paratroop missions along a great circle route from German-occupied Norway. Units deployed included the 131st Infantry Regiment, an anti-aircraft regiment, and a barrage balloon battalion for a total in mid-1942 of 7,000 troops in the area. Canada provided an anti-aircraft battalion, elements of the Royal Canadian Mounted Police, barracks and defensive positions for some of the U.S. force, and a warning system of 266 aircraft observation posts of the Aircraft Identity Corps extending northward to Hudson Bay. This was augmented by five U.S.-staffed radar stations in northern Ontario. By late 1943, with no threat emerging and spare components stockpiled in the event of lock damage, the U.S. forces were cut to 2,500 troops, and the AA and air warning defences were abandoned. In January 1944 the garrison was further reduced to a single military police battalion. 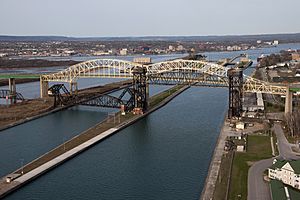 The International Bridge with the rail bridge crossing the American Locks.

The Edison Sault Electric Hydroelectric Plant, located at the eastern end of the Sault Ste. Marie Power Canal which runs between Lake Superior and Lake Huron through the city south of the American locks, is one of the longest hydroelectric plants in the world at 1,340 feet (408 m) in length. The plant consists of 74 three-phase generators capable of generating 25 to 30 megawatts. It was completed in 1902. The hydro plant is faced with stone quarried during the excavation of the Sault Ste. Marie Power Canal.

The United States Army Corps of Engineers owns and operates a hydroelectric generating plant directly north of the American locks.

Finally, the Francis H. Clergue Generating Station, owned and operated by Brookfield Renewable Energy, Inc., is a hydroelectric generating plant located directly north of the Canadian lock with a generating capacity of 52 MW. It was completed in 1981.

The Edison Sault Power Canal is used to power the Saint Marys Falls Hydropower Plant at its eastern end. The canal separated downtown Sault Ste. Marie, Michigan, from its mainland, making it an island. It was begun in September 1898 as the Michigan Lake Superior Power Company Canal, but completed by Edison Sault Electric Company in June 1902. Measured from its headgates to its end at the power plant, it is 2.25 miles (3.62 km) in length, between 200 and 220 feet (61 and 67 m) wide, and 24 feet (7.3 m) deep. The water runs down the canal at speeds upwards of 7 miles per hour (11 km/h).

The American Soo Locks are the major transportation route around the St. Marys Rapids, but the Canadian Sault Ste. Marie Canal is still used by recreational and tour boats.

A set of compensating works are located at the mouth of the rapids, which are used to control the outflow of water from Lake Superior. The works consists of 16 gates, half of which are on the American side, and the other half on the Canadian side of the river. They were completed between 1901 and 1921. This flow is controlled by the International Joint Commission.

A concrete berm was constructed along the north side of the rapids as remedial works to protect fish spawning habitat from lower outflow through the rapids. This was due, in part, to an increase of water outflow from the three hydroelectric dams. 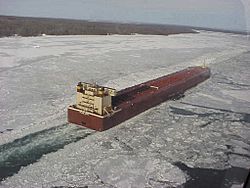 The Saint Marys River is listed as a Great Lakes Areas of Concern in the Great Lakes Water Quality Agreement between the United States and Canada.

All content from Kiddle encyclopedia articles (including the article images and facts) can be freely used under Attribution-ShareAlike license, unless stated otherwise. Cite this article:
St. Marys River (Michigan–Ontario) Facts for Kids. Kiddle Encyclopedia.