Drummond Township is a civil township of Chippewa County in the U.S. state of Michigan. The population was 1,058 at the 2010 census.

The township consists of Drummond Island, the seventh-largest lake island in the world. With an area of 347 km2 (134 sq mi), it is also the third-largest lake island in Lake Huron, following Manitoulin Island and St. Joseph Island, and the fifth-largest island in the contiguous United States, following Long Island, Padre Island, the lake island of Isle Royale and Whidbey Island. M-134 extends from the mainland to run through the western portion of the island, connecting with the mainland via the Drummond Island Ferry, which runs between the island and De Tour Village.

On the east side of Drummond Island, the Canada–United States border passes through the False Detour Channel. On the other side of that channel, the Canadian Cockburn Island separates Drummond from Manitoulin Island.

The history of Drummond Island dates back centuries, but more recent history of the past 200 years relates to the British occupation of the island during and after the War of 1812. The island was the last British outpost on American soil following the Treaty of Ghent (1814). It was finally returned to American hands in 1828. Drummond Island is the only island in the Manitoulin island chain which is part of the United States.

The border on the Great Lakes

British and American negotiators to the 1814 Treaty of Ghent ended the War of 1812 by offering no territorial concessions to either side, but returned to those boundaries set by the Treaty of Paris of 1783. But, in order to resolve territorial claims that had precipitated the war, negotiators at Ghent established a process whereby commissioners would survey the boundary to determine the borders envisioned in the original treaty. 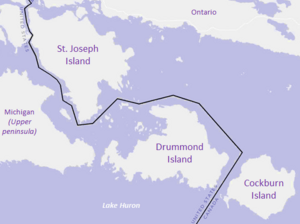 St. Joseph, Drummond and Cockburn islands and the placement of the international boundary agreed to in 1822 and 1842

Beginning in August 1820, two teams of surveyors, including British explorer and cartographer David Thompson, mapped the area of St. Joseph Island, Drummond Island, and Lesser and Greater Manitou Islands (today Cockburn and Manitoulin islands). Mapping this corner of Lake Huron was a challenge given that little was known about the shores and depths of the channels between the islands. The agent for the United States survey team, Major Joseph Delafield, complained, "No map that I have seen has any truth as it respects the position of Drummond's or the other islands about St. Marys. We entered this bay without a pilot, but are told we cannot proceed up river without one."

Based on the surveys taken in the summers of 1820 and 1821, and guided by the Commission's two principles that the boundary would not divide islands and that the number of islands would be apportioned equally between the two countries, in November and December 1821, commissioners agreed to grant St. Joseph Island and Cockburn Island to Canada and Drummond Island, which lies between them, to the United States.

Drummond Island is an oasis of wildlife. Deer are a very common sight, with the occasional bear lumbering by. Other common forest mammals include raccoons, weasels, woodchucks, rabbits, squirrels, chipmunks, and mice of several varieties. Rarer sightings may include bobcats, coyotes, wolves, and the occasional moose. Wetlands host many species. Frogs inhabit small ponds, as does the northern water snake. Turtles, as slow as they are, can be slightly harder to find than snakes.Painted turtles may be found along the road as well as in ponds. There are also garter snakes and copper bellies, all non-venomous varieties. As for birds, there are several species of woodpeckers, the ruby-throated hummingbird, many finch species, sparrows, blackbirds, crows, ravens, owls, hawks, osprey and eagles. Most of the species of fish found in the Great Lakes are present here in northern Lake Huron. There are also many species of minnow. All the lake bottom environment has been drastically affected by the introduction of the zebra mussel. The environment used to support habitat for crayfish, three leech varieties, water insects and snails. There are no ticks on Drummond Island.

Over two thirds of the island is land owned by the state of Michigan. The island hosts a very rare environment known as alvar, a grassy limestone plain found only in a few places worldwide, the best example being on Drummond Island.

There were 467 households, out of which 18.2% had children under the age of 18 living with them, 58.5% were married couples living together, 3.9% had a female householder with no husband present, and 33.8% were non-families. 29.3% of all households were made up of individuals, and 10.5% had someone living alone who was 65 years of age or older. The average household size was 2.12 and the average family size was 2.59.

All content from Kiddle encyclopedia articles (including the article images and facts) can be freely used under Attribution-ShareAlike license, unless stated otherwise. Cite this article:
Drummond Township, Michigan Facts for Kids. Kiddle Encyclopedia.