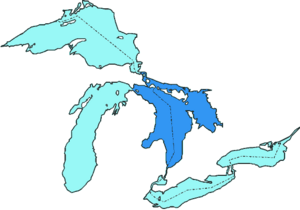 Lake Huron is one of North America's five Great Lakes. It is the third one up from the mouth. Like Lake Ontario, Lake Erie, and Lake Superior, it is also part of the boundary between the USA and Canada. The Huronian glaciation, billions of years ago, is named for the lake.

Lake Huron borders the Canadian province of Ontario and the American state of Michigan. There are no large cities on Lake Huron, but there are some small cities such as Sarnia, Ontario and Bay City, Michigan.

On 1996 an hurricane-like storm appeared on Lake Huron, while the National Hurricane Center was not sure to call it a hurricane or not. Because the storm formed over Lake Huron and that it did not get a name from the NHC, many people nicknamed the storm, "Hurricane Huron".

All content from Kiddle encyclopedia articles (including the article images and facts) can be freely used under Attribution-ShareAlike license, unless stated otherwise. Cite this article:
Lake Huron Facts for Kids. Kiddle Encyclopedia.