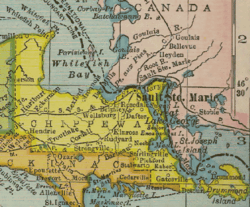 Chippewa County is a county in the Upper Peninsula of the U.S. state of Michigan. As of the 2010 census, the population was 38,520. The county seat is Sault Ste. Marie. The county is named for the Chippewa tribe, and was set off and organized in 1826.

The Munuscong Bay is open for recreation uses, such as hunting, boating and bird watching. The area is known for its duck hunting, including mallards, divers and green-winged teal ducks. The Bay is most known for its icefishing and duck hunting. During opening weekend of duck season (late September), hundreds of hunters come from all over the state to begin their season on the Bay. This area has many types of waterfowl pass through it each year on their southern and northern migrations.

All Interstate and US Highways in Michigan, like all state-maintained highways, are part of the Michigan State Trunkline Highway System.

The following highways are maintained by the Chippewa County Road Commission as part of the county road system. They are assigned numbers by the Michigan Department of Transportation as part of the County-Designated Highway System.

All content from Kiddle encyclopedia articles (including the article images and facts) can be freely used under Attribution-ShareAlike license, unless stated otherwise. Cite this article:
Chippewa County, Michigan Facts for Kids. Kiddle Encyclopedia.