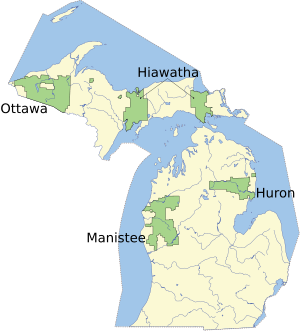 According to the forest service, it was "named after the Mohawk chief, Hiawatha, who brought about the confederation known as the Five Nations of the Iroquois. He was also the hero of Longfellow's poem, 'Hiawatha'."

In descending order of land area it lies in parts of Chippewa, Delta, Mackinac, Alger, Schoolcraft, and Marquette counties. Chippewa and Mackinac counties are in the East Unit, whereas the rest are in the West Unit. The smaller East Unit contains about 44% of the forest's area, whereas the larger West Unit has about 56%. Forest headquarters are located in Gladstone, Michigan. East Unit ranger district offices are located in Sault Ste. Marie and St. Ignace, while West Unit offices are in Manistique, Munising, and Rapid River.

The East Unit was a large infertile sandy area that was never homesteaded or developed. It was designated Marquette National Forest by President Theodore Roosevelt in 1909. This land was administered with Huron National Forest as the Michigan National Forest from 1918 until 1962, when it was transferred to Hiawatha. The forest was authorized to buy an additional 307,000 acres (124,200 ha) in 1925 and 50,000 acres (20,230 ha) in 1935. The government began purchasing land for the West Unit in 1928, this land and was designated Hiawatha National Forest in 1931. This unit was extensively replanted by the Civilian Conservation Corps. 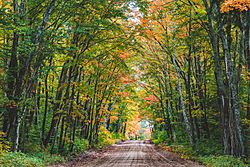 The forest has over 100 miles (160 km) of shoreline. Both units have shoreline on both Lake Superior and Lake Michigan; the east unit also has shoreline on Lake Huron and includes Round Island and its lighthouse. The West Unit borders Pictured Rocks National Lakeshore, which is administered by the National Park Service, and the Grand Island National Recreation Area, which is separately administered by the U.S. Forest Service.

Several lighthouses are located along the shores. The Point Iroquois Light is operated as a museum.

Hiawatha National Forest has many popular areas for camping tourism. Some of the campgrounds include the following:

All content from Kiddle encyclopedia articles (including the article images and facts) can be freely used under Attribution-ShareAlike license, unless stated otherwise. Cite this article:
Hiawatha National Forest Facts for Kids. Kiddle Encyclopedia.