Gladstone is a city in Delta County in the U.S. state of Michigan. It is also known locally as "Happy Rock", a play on words of Gladstone. First settled in 1877, Gladstone's original name was Minnewasca. The population was 4,973 at the 2010 census.

U.S. Highways 2 and 41 run concurrently through the city, connecting with Escanaba, nine miles (14 km) to the south. US 41 runs north to Marquette and US 2 runs east to Manistique. M-35 runs northwest 52 miles (84 km) to Gwinn and merges with US 2/US 41 south to Escanaba.

The town was originally named Minnewasca by the Soo Line Railroad, the Ojibwa name meaning "white water." When the name was filed with the county and Secretary of State in Lansing, Senator W. D. Washburn, who had an interest in building the railroad, persuaded officials to change the name to Gladstone in honor of British premier, William Evert Gladstone.

Earliest development was on Saunders Point, so named for Capt. Nate Saunders who headquartered there when fishing at various points along the bay, was the location for the initial build-up of Gladstone. Today, Saunder’s Point still exists as a small peninsula east of Gladstone’s city park system, located in Little Bay De Noc.

Expanding beyond its iron ore roots into a shipping point for lumber, coal, and copper during the American civil war, throughout the 1860s and 1870s, Gladstone grew into a busy port.

In 1876, the Hamilton Corporation had to move its operations when their mine dried up. The new mine location, further south, meant shipping their ore through the Escanaba port. Arthur Delano, the president of Soo Line Railroad, had commissioned a train depot built in Saunder’s Point during the previous winter to start land shipping for the Hamilton Corporation.[The Trains staff (November 1990). Timeline. Trains, pp. 21–47] However, since this was no longer possible, Delano began commissioning local industries.

Gladstone was in corporated as a village in 1887 and as a city in 1889. Gladstone is named after the English statesman William Ewart Gladstone. 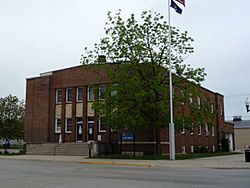 The city is on a small projection into the Little Bay de Noc, which opens onto Green Bay on Lake Michigan.

Due to the city’s proximity to Lake Michigan, Gladstone consistently has high humidity and experiences four distinct seasons. Summers are warm and humid, with average high temperatures in the mid 80s and average lows in the mid 60s. Winters are cold, snowy and windy with temperatures often below freezing. Spring and fall are mild with low humidity. According to the National Weather Service, Gladstone’s record low comes in at -60 on January 7, 1896 [1]. To this day, this storm is referred to by Gladstone residents as “les morte a doigts,” since so many of the city’s residents lost fingers due to frostbite. On July 19, 1992, Gladstone experienced a rare tornado which caused moderate damage throughout the city.

Gladstone is often referred to as “The Year Round Playground” because of its myriad of parks and activities. Gladstone’s main park is Van Cleve, which hosts a playground (Kid’s Kingdom), a skateboarding park, baseball field, basketball court, fitness trail, a beach with water slide, boardwalk, as well as a harbor with boat ramps and fish cleaning station.

Another Gladstone attraction is the Gladstone Sports Park, which hosts several baseball fields, skiing and snowboarding runs and a tubing facility. The Park itself is often rented out for other activities, including wedding receptions, and high school graduation parties.

Gladstone also hosts the Days River Trails, which are hiked and biked in the spring, summer, and fall. In the winter, these trails are used primarily for cross-country skiing.

Gladstone was featured in the 2010 documentary film Catfish. 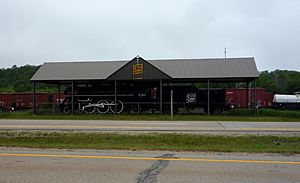 Obviously, the US Highway Department had high expectations for Gladstone in its original 1926 highway plan.

There were 2,182 households of which 27.9% had children under the age of 18 living with them, 49.5% were married couples living together, 9.3% had a female householder with no husband present, 4.1% had a male householder with no wife present, and 37.0% were non-families. 32.4% of all households were made up of individuals and 17.4% had someone living alone who was 65 years of age or older. The average household size was 2.27 and the average family size was 2.84.

All content from Kiddle encyclopedia articles (including the article images and facts) can be freely used under Attribution-ShareAlike license, unless stated otherwise. Cite this article:
Gladstone, Michigan Facts for Kids. Kiddle Encyclopedia.