Green Bay is an arm of Lake Michigan, located along the south coast of Michigan's Upper Peninsula and the east coast of Wisconsin. It is separated from the rest of the lake by the Door Peninsula in Wisconsin, the Garden Peninsula in Michigan, and the chain of islands between them, all formed by the Niagara Escarpment. Green Bay is some 120 miles (193 km) long, with a width ranging from about 10 to 20 miles (16 to 32 km); it is 1,626 square miles (4,210 km2) in area.

At the southern end of the bay is the city of Green Bay, Wisconsin, where the Fox River enters the bay. The Leo Frigo Memorial Bridge (formerly known as the Tower Drive bridge) spans the point where the bay begins and the Fox River ends, as the river flows south to north into the bay. Around mid-bay are Sturgeon Bay and the Peshtigo River. The Sturgeon Bay serves the city named after the bay as a shortcut for large ships to use to bypass the Door Peninsula, while the Peshtigo River serves Peshtigo and Crivitz. Locally, the bay is called the Bay of Green Bay to distinguish it from the city.

The bay is located in parts of five counties in Wisconsin (Brown, Door, Kewaunee, Marinette, Oconto), and two in Michigan (Delta, Menominee). 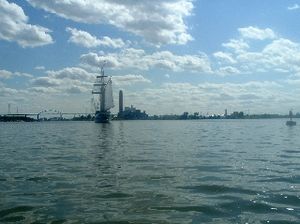 A Tall ship sailing into the mouth of the Fox River

Oconto is home to Copper Culture State Park, which has remains dated to around 5000-6000 BC. It is a burial ground of the Copper Culture Indians. This burial ground is considered to be the oldest cemetery in Wisconsin and one of the oldest in the nation. The Ho-Chunk believe that they were created on the shores of Green Bay at a place called Red Banks.

The bay was named la baie des Puants (literally, "the bay of the Stinks") by the French explorer Jean Nicolet as shown on many French maps of the 17th and 18th centuries. According to George R. Stewart, the French received the name from their Indian guides, who called the natives living near Green Bay by a derogatory word meaning "Stinkers", thus the bay was the "Bay of the Stinkers", but this name perplexed the French, and Jacques Marquette thought the name might relate to the smell of the swamps when he explored the area in May 1673. His fellow explorer Louis Joliet, with two canoes and five voyageurs of French-Indian ancestry (Métis) were on their way to find the Mississippi River. They travelled up the Fox River, nearly to its headwaters. The French also called the bay Baie Verte, and the English kept this name as Green Bay. The name of the bay in the Menominee language is Pūcīhkit, or "bay that smells like something rotting".

Ferromanganese nodules have been found in the bay. Todorokite occurs within the nodules.

There are numerous reefs of exposed bedrock in the Porte des Mortes passage and in the bay.

North of the peninsula, warm water from Green Bay flows into Lake Michigan on the surface, while at the same time, cold lakewater enters Green Bay deep underneath.

According to the Environmental Protection Agency, "Areas of Concern are designated by the International Joint Commission as geographic areas in the Great Lakes basin having severe environmental degradation. There are 43 Areas of Concern with 26 in the United States, 17 in Canada, and five shared by the two countries." [1][2]

Lower green Bay Area of Concern was designated in 1987 under the Great Lakes Water Quality agreement.

It was designated by these sources of pollution:

Beneficial Use Impairments (BUI) are a change in the chemical, physical or biological integrity of the Great Lakes system sufficient to cause significant environmental degradation. The International Joint Commission identified 14 BUIs listed below. All BUIs that have been designated for an AOC, must be removed for the AOC to be considered restored and begin the delisting process.[3]

Since 1988 over three quarters of the 120 remedial actions recommended by the lower green bay remedial action plan have been implemented or initiated.

Past Emergency Clean Up: In 1999 and 2000, EPA oversaw a dredging project done by some of the paper companies about 3 miles upstream from the mouth of the Lower Fox River.  It removed 80,000 cubic yards of PCB-contaminated sediment, containing 3,400 pounds of PCBs.

All content from Kiddle encyclopedia articles (including the article images and facts) can be freely used under Attribution-ShareAlike license, unless stated otherwise. Cite this article:
Green Bay (Lake Michigan) Facts for Kids. Kiddle Encyclopedia.