Door County is a county in the U.S. state of Wisconsin. As of the 2010 census, the population was 27,785. Its county seat is Sturgeon Bay.

The county was created in 1851 and organized in 1861. It is named after the strait between the Door Peninsula and Washington Island. The dangerous passage, which is now scattered with shipwrecks, was known to early French explorers and local Native Americans.

Door County is a popular vacation and tourist destination, especially for residents of Wisconsin and Illinois.

The Door County peninsula has been inhabited for about 11,000 years. Artifacts from an ancient village site at Nicolet Bay Beach have been dated to about 400 BCE. This site was occupied by various cultures until about 1300 CE.

Door County's namesake came from "Porte des Morte", anglicized as "Death's Door", or the passage between the tip of the Door County Peninsula and Washington Island. It's a common misconception that the name "Death's Door", or "Porte des Morts", arose from the number of shipwrecks associated with the passage. It was instead the result of native-American tales, heard by early French Explorers, related to a failed raid by the Ho-Chunk (Winnebago) tribe to capture Washington Island from the rival Pottawatomie tribe in the early 1600s. A storm arose as the war party was halfway across, capsizing and killing about a third of the Ho-Chunk tribe in the process.

The 18th and 19th centuries saw the immigration and settlement of pioneers, mariners, fishermen and farmers, with the first white settler being Increase Claflin. Economic sustenance came from lumbering and tourism.

During the 19th century, various groups of Native Americans occupied the area that would become Door County and its islands. Beginning in mid-century, these Indians, mostly Potawatomi, were removed from the peninsula by the federal government under the Indian Removal Act of 1830. Later in the 19th century, a fairly large-scale immigration of Belgian Walloons populated a small region in the county. 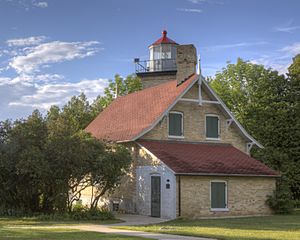 An aerial photo of Nicolet Bay at Peninsula State Park

A Civilian Conservation Corps camp was established at Peninsula State Park during the Great Depression. In the summer of 1945, Fish Creek was the site of a German POW camp, under an affiliation with a base camp at Fort Sheridan, Illinois. The prisoners engaged in construction projects, cut wood, and picked cherries in Peninsula State Park and the surrounding area. Eagle Bluff Lighthouse was constructed in Peninsula State Park in 1868 on orders from President Andrew Johnson, at a cost of $12,000. It was restored by the Door County Historical Society in 1964, and opened to the public.

According to the U.S. Census Bureau, the county has a total area of 2,370 square miles (6,100 km2), of which 482 square miles (1,250 km2) is land and 1,888 square miles (4,890 km2) (80%) is water. It is the largest county in Wisconsin by total area. The county also has 298 miles of shoreline. Locals and tourists alike refer to the area as the "Cape Cod of the Midwest". The county covers the majority of the Door Peninsula. With the completion of the Sturgeon Bay Shipping Canal in 1881, the northern half of the peninsula, technically became an island.

Limestone outcroppings of the Niagara Escarpment are visible on both shores of the peninsula, but are larger and more prominent on the Green Bay side as seen at the Bayshore Blufflands. Progressions of dunes have created much of the rest of the shoreline, especially on the easterly side. Flora along the shore provides clear evidence of plant succession. The middle of the peninsula is mostly flat or rolling cultivated land. Soils overlaying the dolomite bedrock are very thin in the northern half of the county; 39% of the County is mapped as having less than three feet (about a meter) to bedrock. Beyond the northern tip of the peninsula, the partially submerged ridge forms a number of islands that stretch to the Garden Peninsula in the Upper Peninsula of Michigan. The largest of these islands is Washington Island. Most of these islands form the Town of Washington. 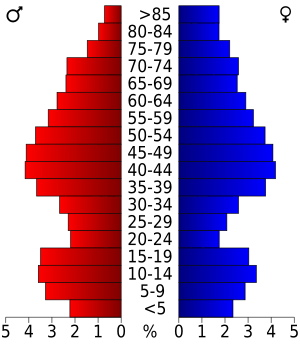 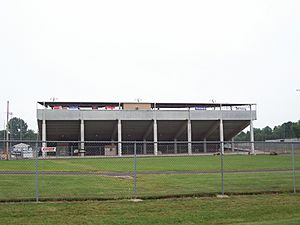 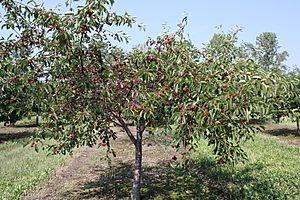 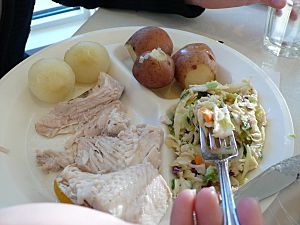 Although Door County has a year-round population of about 28,000, it experiences a tourist explosion each summer between Memorial Day and Labor Day. Most businesses are targeted to visitors and close during the off-season. In the summer, the population of Door County can reach as high as 250,000. The majority of tourists and summer residents come from the metropolitan areas of Milwaukee, Chicago, Madison, Green Bay, and the Twin Cities. The area has been called "the Cape Cod of the Midwest".

Fish boils, offered at many Door County restaurants, are a popular meal for tourists.

Door County has a history of cherry growing that dates back to the 19th century. Many of the cherry orchards offer "pick your own cherries", along with more traditional pre-picked containers. Cherry and apple stands can be found along many of Door County's country roads when in season. 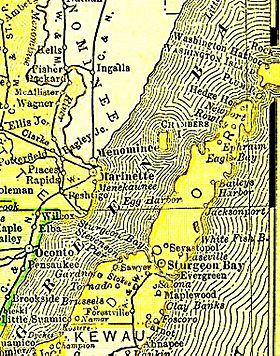 All content from Kiddle encyclopedia articles (including the article images and facts) can be freely used under Attribution-ShareAlike license, unless stated otherwise. Cite this article:
Door County, Wisconsin Facts for Kids. Kiddle Encyclopedia.