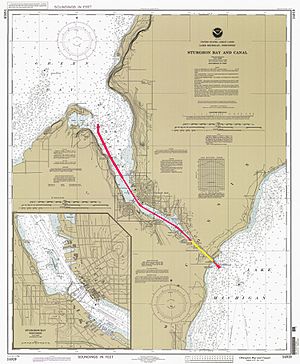 The Sturgeon Bay Ship Canal highlighted on a 1997 NOAA chart. The dredged channel is in red; the canal itself is in yellow.

The Sturgeon Bay Ship Canal is a shipping canal connecting Sturgeon Bay on Green Bay with Lake Michigan, across the Door Peninsula, at the city of Sturgeon Bay, Wisconsin, United States. The canal allows shipping to transit directly from Lake Michigan to Green Bay, avoiding the dangerous Porte des Morts strait. The canal is approximately 1.3 miles in length, dug through the eastern side of the Door Peninsula in a northwest to southeast orientation. There are no locks. At its northwestern end, it connects to a dredged channel in Sturgeon Bay which in turn leads to Green Bay. The canal was dug by a private group headed by then-president of Chicago and North Western Railway, William B. Ogden, between July 8, 1872 and the late fall of 1881. Although smaller craft began using the canal in 1880, it was not open for large-scale watercraft until 1890.

In 1893, the Ogden private investors group sold all interest in the canal to the United States government. Since that time, the canal has been maintained by the U.S. Army Corps of Engineers.

All content from Kiddle encyclopedia articles (including the article images and facts) can be freely used under Attribution-ShareAlike license, unless stated otherwise. Cite this article:
Sturgeon Bay Ship Canal Facts for Kids. Kiddle Encyclopedia.