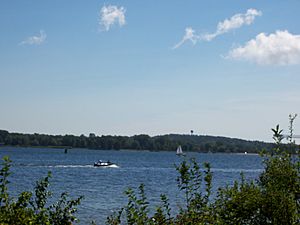 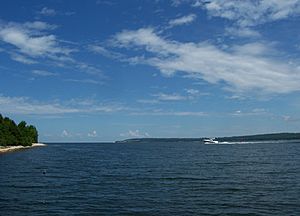 Looking northeast at the mouth of Sturgeon Bay

Sturgeon Bay and Little Sturgeon (just to the south of Sturgeon Bay) are considered biodiversity hotspots because they support a large number of different fish species.

In June 2016, an estimated several thousand mayflies hatched in Sawyer Bay (within Sturgeon Bay). This was the result of an experiment to stock millions of eggs from the species Hexagenia limbata and Hexagenia bilineata in the lower Green Bay area in an attempt to reintroduce the species. The last mayfly from the genus Hexagenia had been collected in the lower Green Bay area in 1955. As mayfly populations can be unstable and not all stocking locations appeared to be successful, as of 2017 it was not yet known whether it would be possible for populations of Hexagenia mayflies to become self-sustaining.

All content from Kiddle encyclopedia articles (including the article images and facts) can be freely used under Attribution-ShareAlike license, unless stated otherwise. Cite this article:
Sturgeon Bay Facts for Kids. Kiddle Encyclopedia.