Peninsula State Park is a 3,776-acre (1,528 ha) Wisconsin state park with eight miles (13 km) of Green Bay shoreline in Door County. Peninsula is the third largest state park in Wisconsin, and is visited by an estimated one million visitors annually.

Peninsula State Park was established in 1909. Land was acquired for an average of $20 per acre. The state legislature officially established Peninsula as a state park in 1910, making it the second state park in Wisconsin. With a budget of less than $2,000 per year, work on the park proceeded slowly. Early projects included miles of roads, scenic lookouts, campgrounds, two towers, and initial portions of two golf courses. During the 1919 season, which marked the end of Peninsula’s first decade, an estimated twenty-thousand people visited Peninsula. Around this time, Doolittle established Door County Days, a summer picnic with music and sports events attended by thousands. Peninsula was becoming a premier outdoor playground in the Midwest.

A Civilian Conservation Corps camp was established at Peninsula State Park during the Great Depression. In the summer of 1945, Fish Creek was the site of a German POW camp, under an affiliation with a base camp at Fort Sheridan, Illinois. The prisoners engaged in construction projects, cut wood, and picked cherries in the park and surrounding area.

In 1982, Sunset Bike Trail was surfaced, computers began to be used for reservations, and an irrigation system was installed on the golf course. In 1992 the first deer hunt was held on the park grounds. In 2001, tree thinning was started and eventually completed in Tennison Bay. The park celebrated its Centennial in 2009.

Considered Wisconsin's most complete park, Peninsula has 468 campsites, three group camps, a summer theater, an 18-hole golf course, sand beach, biking, hiking and ski trails, 150-foot bluffs, a lighthouse and eight miles of Door County shoreline. The park is open year-round but some features may not be accessible outside the peak season.

The Eagle Bluff Light, also known as Eagle Bluff Lighthouse, is a lighthouse located near Fish Creek in Peninsula State Park in Door County, Wisconsin. Construction was authorized in 1866 by President Andrew Johnson, but the lighthouse was not actually built until 1868, at a cost of $12,000. It was automated in 1926. The former lighthouse keeper's home has been a museum since 1963. Park admission and a donation is required to tour the lighthouse. 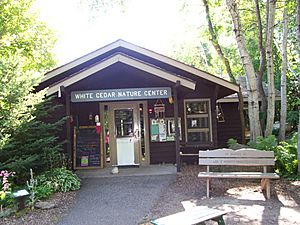 The White Cedar Nature Center features a display of mounted animals, as well as historic photos and artifacts, and a large diorama of the park. The building was constructed in 1939 as a winter warming house for the nearby ski jump and toboggan run, both abandoned in the 1940s. The Nature Center offers public natural history education programs, including hikes, campfire talks and nature crafts year-round.

Eagle Tower was a 76-foot (23 m) observation tower located atop the 180-foot (55 m) limestone Eagle Bluff. The tower offered views of the park, surrounding islands, and the Michigan shoreline. The most recent tower was built in 1932 to replace the original tower built on Eagle Bluff in 1914. Another tower stood in the park at Sven's Bluff from 1914 to 1947 but was dismantled due to poor condition and never replaced. The Eagle tower closed September 9, 2015 as a result of disrepair. On September 19, 2016 the tower was dismantled. Fundraising efforts are currently underway to rebuild the tower.

Horseshoe Island is the only nearby island owned by the State of Wisconsin. Located in Green Bay, the island is accessible by private boat. It has no establishments other than a pit toilet, a hiking trail and the foundations of buildings once occupied by the Folda family in the 1890s. The French explorer Jean Nicolet reportedly landed briefly on the island. 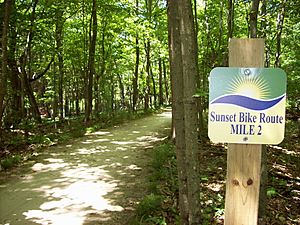 Sunset Bike Trail is a 5.1-mile (8.2 km) paved/gravel trail that snakes through Peninsula's and hardwoods and marshes. The entire route is 9.5 miles (15.3 km) and takes about one hour to bike and three hours to hike. Sunset Bike Trail provides a safe and scenic alternative to Shore Road for bikers and hikers. Riders are not required to have a Wisconsin State Trail Pass. 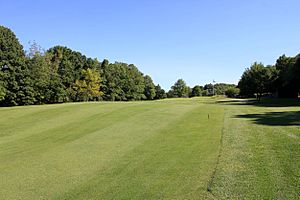 One of the fairways

The non-profit Peninsula Golf Associates operate the park's 18-hole golf course, considered to be one of the most scenic in Wisconsin.

What is now the Peninsula Golf Course began in 1913 as two proposed nine-hole courses, one near the Fish Creek park entrance and the other at the present site. Planning and work began slowly since money was tight and water was a problem. After a few years, the Fish Creek site was abandoned. In 1921 The Door County Country Club opened for play as a six-hole golf course, functioning with “sand and oil” greens during its first ten years. By 1926, three more holes had been developed, one of which was the 65-yard, over the bluff, par three that has been the signature hole ever since. During the next few years, the final nine were constructed, and by 1931 an 18-hole golf course measuring 5,000 yards was ready to play. In the 1960s, when the course was lengthened and redesigned.

In 1977, 47 species of birds were counted in the forests and campgrounds of the park, but no more than 26 species were found in any particular habitat type.

Nicolet Bay is divided into two parts, North and South. The Nicolet Bay camping area has one-hundred and eighty-eight campsites sites, thirty-three of which have electricity. There are shower/flush toilet buildings throughout the campground. The park’s sandy swimming beach—popular with campers and very crowded during warm summer days—is located at Nicolet Bay. The Camp Store, Boats and Bikes Rentals, Snack Bar, and boat launch at Nicolet Bay are open seasonally.

Tennison Bay is the largest campground in the park; it has one-hundred and eighty-eight campsites, fifty-six of which are electric. Tennison has two shower/bathroom facilities and three flush toilet facilities (without showers). There is a playground and kayak launch at the north end of the campground. Tennison is the only campground open year-round.

Weborg is Peninsula's smallest campground, with twelve electric sites and one shower/toilet building. These sites are popular with RV and trailer campers. Weborg is near the park's Fish Creek entrance and has views of downtown Fish Creek. A concrete pier at the tip of Weborg Point is popular with recreational fishermen. The Weborg Point shelter is available for reservations.

Welcker's Point is an eighty-one-site non-electric campground located at the northern peninsula of the park. Welcker's is popular among campers with tents and small trailers because of the heavily wooded nature of the surrounding forest. It is also at the head of many hiking and biking trails (including a path to Nicolet Beach) and has a reservable shelter just outside the campground, which is a popular place for visitors to view bats 30 minutes after sunset during summer evenings.

Views from or near the campgrounds

All content from Kiddle encyclopedia articles (including the article images and facts) can be freely used under Attribution-ShareAlike license, unless stated otherwise. Cite this article:
Peninsula State Park Facts for Kids. Kiddle Encyclopedia.