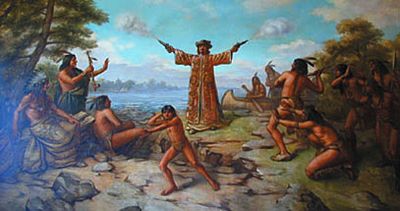 Jean Nicolet (Nicollet), Sieur de Belleborne (c. 1598 – October 1642) was a French coureur des bois noted for exploring Lake Michigan, Mackinac Island, Green Bay, and being the first European to set foot in what is now the U.S. state of Wisconsin.

Nicolet (Nicollet) was born in Cherbourg-Osterville, France, in the late 1590s, the son of Thomas Nicollet, who was "messenger ordinary of the King between Paris and Cherbourg", and Marguerite de Lamer. They were members of the Roman Catholic Church. He was a known friend of Samuel de Champlain and Étienne Brule. He was attracted to Canada to participate in Champlain's plan to train young French men as explorers and traders by having them live among Native Americans. The French were setting up fur trading under the Compagnie des Marchand's.

In 1618, Nicolet immigrated to Quebec as a clerk to train as an interpreter for the Compagnie des Marchands, a trading monopoly owned by members of the French aristocracy. As an employee, Jean Nicolet was a faithful supporter of the Ancien Régime.

To learn the language of the First Nations, Nicolet was sent to live with the Algonquins on Allumette Island, a friendly settlement located along the important Ottawa River fur trade route. Upon his return to Quebec in 1620, he was assigned to live among the Odawa and Algonquin people in the Lake Nipissing region. During his nine-year stay, he ran a store and traded with the native peoples in the area.

He had a relationship with Jeanne-Gisis Bahmahmaadjimiwin, and they had a daughter, whom he named Euphrosine-Madeleine Nicolet. When Nicolet returned to Quebec, he brought his daughter Euphrosine with him to educate her among the French. On July 19, 1629, when Quebec fell to the Kirke brothers who took control for England, Jean Nicolet fled with his daughter to the safety of the Huron country. He worked from there against English interests until the French were restored to power. 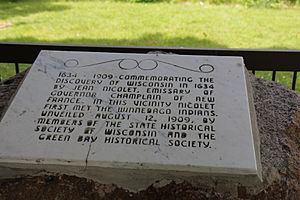 Nicolet is noted for being the first European to explore Lake Michigan. In 1634 he became the first European to explore what would become Wisconsin. Jean Nicolet landed at Red Banks, near modern-day Green Bay, Wisconsin, in search of a passage to the Orient. He and other French explorers had learned from their native contacts that the people who lived along these shores were called Ho-Chunk, which some French mistakenly translated as "People of the Sea". In the Ho Chunk language, it means people of the big voice, because they believe their language was the original language of their family of tribal languages. However, the Ojibwe had a less appealing name for them, Winnebago, or "people of the fragrant waters," translated to French as, Puants or Puans. This exonym was derogatory, however, not knowing that, Nicolet concluded that the people must be from or near the Pacific Ocean, and would provide a direct contact with China.

Nicolet became the French ambassador to the Ho-Chunk people. He wore brightly colored robes and carried two pistols, to convey his authority. The Ho-Chunk people appreciated his ritual display. With some Ho-Chunk guides, Nicolet ascended the Fox River, portaged to the Wisconsin, and travelled down it until it began to widen. So sure was he that he was near the ocean, that he stopped and went back to Quebec to report his discovery of a passage to the "South Sea," unaware that he had just missed finding the upper Mississippi River.

Jean Nicolet drowned after his boat capsized during a storm while traveling along the St. Lawrence River.

All content from Kiddle encyclopedia articles (including the article images and facts) can be freely used under Attribution-ShareAlike license, unless stated otherwise. Cite this article:
Jean Nicolet Facts for Kids. Kiddle Encyclopedia.