Rhinelander is a city in, and the county seat of, Oneida County, Wisconsin, United States. The population was 8,285 at the 2020 census.

The area that eventually became the city of Rhinelander was originally called Pelican Rapids by early settlers, named for the stretch of rapids just above the convergence of the Wisconsin and Pelican Rivers. Around 1870, Anderson W. Brown of Stevens Point and Anson P. Vaughn traveled up the Wisconsin River in order to cruise timber for Brown's father, E. D. Brown. Upon arriving at the meeting point of the Wisconsin and Pelican Rivers at the site of John Curran's trading post, and seeing the high banks along the rapids and the excellent pine stands, Anderson Brown envisioned a mill town with a lumber mill powered by the waters of the Wisconsin River. Brown's vision would not come to fruition for some years, however after subsequent expeditions with others including his brother and Rhinelander's first mayor, Webster Brown, the brothers managed to convince their father and uncle to purchase the land from the federal government and build a town. In its charter, the city was named Rhinelander after Frederic W. Rhinelander of New York, who was president of the Milwaukee, Lake Shore & Western Road at the time. This was part of a bid by the Brown brothers to induce the railroad to extend a spur to the location to further their lumbering business. Ultimately, after over ten years of negotiations, the Brown family agreed to convey half their land holdings in the area to the railroad in exchange for a rail line to their future city. In 1882, the railroad line from present-day Monico to Rhinelander was completed, jump starting the development of Rhinelander as the commercial hub of the region.

Rhinelander-Oneida County Airport (KRHI) serves Rhinelander and the surrounding Oneida county communities with both scheduled commercial jet service and general aviation services. Located 2 mi southwest of the city, the airport handles about 24,958 operations per year, with around 88% general aviation, 6% scheduled commercial air service and 6% air taxi. The airport has a 6,799-ft concrete primary runway with approved ILS, GPS and VOR/DME approaches (runway 9-27) and a 5,201-ft asphalt crosswind runway with approved GPS approaches (runway 15-33). In addition, the Rhinelander VORTAC (RHI) navigational facility is located at the field.

The Rhinelander area has numerous vacation destinations, offering fishing, boating, canoeing, kayaking, ATVing, mountain biking and hiking, hunting, golfing, cross country skiing and snowshoeing, snowmobiling, and bird watching. It also serves as a main shopping and lodging area for the Northwoods. During the summer, there is a flea market on the Highway 17 bypass. 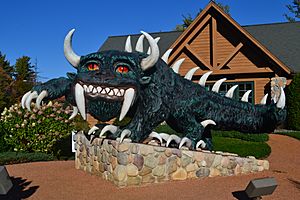 A modern statue of the Hodag on display in front of the Rhinelander chamber of commerce.

Rhinelander is the home of the Hodag, a folkloric green and white creature said to stalk the local woods. The Hodag serves as mascot for the city and for Rhinelander High School and Northwoods Community Secondary School.

Rhinelander is a commercial, industrial, and recreation hub for the Northwoods area of Wisconsin. Because of the forests, lakes, and trails in the area, it is both a summer and winter vacation destination. It has a paper mill and a hospital.

All content from Kiddle encyclopedia articles (including the article images and facts) can be freely used under Attribution-ShareAlike license, unless stated otherwise. Cite this article:
Rhinelander, Wisconsin Facts for Kids. Kiddle Encyclopedia.