Kids Encyclopedia Facts
This page is about the city. For the adjacent town, see Wausau (town), Wisconsin.

Wausau is a city in and the county seat of Marathon County, Wisconsin, United States. The Wisconsin River divides the city into east and west. The city is adjacent to the Town of Wausau. 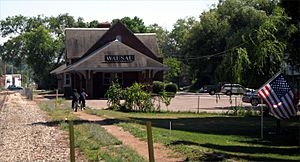 The original Milwaukee Road train station was used as a logo for Wausau Insurance companies starting in 1954; the logo used this angle.

This area was occupied for thousands of years by succeeding cultures of indigenous peoples. The historic Ojibwe (also known in the United States as the Chippewa) occupied it in the period of European encounter. They had a lucrative fur trade for decades with French colonists and French Canadians. After the French and Indian War this trade was dominated by British-American trappers from the eastern seaboard.

The Wisconsin River first drew European-American settlers to the area during the mid-19th century as they migrated west into the Great Lakes region following construction of the Erie Canal in New York State. This provided a route for products from the region to the large New York and other eastern markets. The area had been called "Big Bull Flats" or "Big Bull Falls" by French explorers, who were the first Europeans here. They named it for the long rapids in the river, which created many bubbles, called bulle in French. By an 1836 treaty with the United States, the Ojibwe ceded much of their lands in the area to federal ownership. It was sold to non-Native peoples. Wausau means "a faraway place" or "a place which can be seen from far away" in the Ojibwe language.

This Frank Lloyd Wright-designed house is one of two in the Andrew Warren Historic District. Several Prairie School houses are located in Wausau.

George Stevens, the namesake for the city of Stevens Point located south of Wausau, began harvesting the pine forests for lumber in 1840 and built a saw mill. Lumbering was the first major industry in this area, and other sawmills along the Wisconsin River were quickly constructed by entrepreneurs. By 1846, Walter McIndoe arrived and took the lead in the local business and community. His efforts helped to establish Marathon County in 1850. Word of Stevens' success in the region spread across the country throughout the logging industry. Loggers came from Cortland County, New York, Carroll County, New Hampshire, Orange County, Vermont and Down East Maine in what is now Washington County, Maine and Hancock County, Maine. These were "Yankee" migrants, that is to say they were descended from the English Puritans who had settled New England during the 1600s.

By 1852, Wausau had been established as a town and continued to grow and mature. German immigration into the area following the Revolutions of 1848 in the German states brought more people, and by 1861, the settlement was incorporated as a village.

Churches, schools, industry and social organizations began to flourish. The state granted the city a charter in 1872, and elections are held the first Tuesday in April. The residents elected A. Kickbusch as their first mayor in 1874. Five years earlier, Kickbusch had returned to his homeland of Germany and brought back with him 702 people, all of whom are believed to have settled in the Wausau area. Kickbusch founded the A. Kickbusch Wholesale Grocery Company, a family business carried on by his grandson, August Kickbusch II. In 1917, August Kickbusch II purchased a modest, four-square-style house at 513 Grant Street. He undertook extensive and additions, adding two sun rooms, arcaded windows, a tiled porch in the Mediterranean style, a formal classical entrance, and ornate custom-designed chimney crowns. The home is on the National Register of Historic Places as part of the Andrew Warren Historic District.

When the railroad arrived in 1874, Wausau became more accessible to settlers and industry. This enabled the city to develop alternatives to the lumber industry, which was in decline since the clear-cutting of many forests. By 1906 the lumber was gone, but the city continued to grow and flourish. Other villages and towns in the area declined because of over-harvesting of the forests and lumber mills closed down. 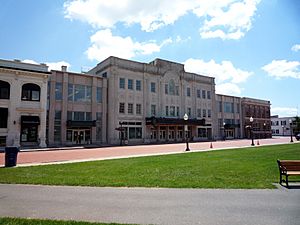 Wausau's favorable location on the Wisconsin River was partly responsible for the city's survival. The economy was diversified in the early 20th century, led by the insurance group, the Employers Insurance of Wausau, now a part of Liberty Mutual. Its logo, first introduced in 1954, was the downtown Milwaukee Road railroad depot, which was set against the backdrop of the community's skyline.

The Wall Street Crash of 1929 had a major effect on the Wausau area. Many industries were forced to cut back by laying off and dismissing workers or by closing altogether. After decades of growth, the city virtually ground to a halt. However, under the New Deal, Wausau was significantly modernized. After World War II, the city once again continued to grow in industry, education, recreation, and retail, more than in population.

After the fall of Saigon, Hmong refugees from Southeast Asia who fought alongside the CIA immigrated into Wausau at the end of the 1970s. Wausau church organizations (Catholic and Lutheran) helped Hmong refugees adapt to American life. 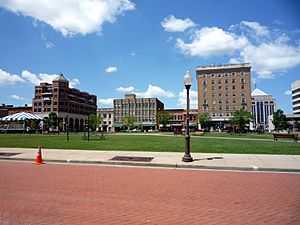 The 400 Block in downtown Wausau

In 1983, the Wausau Center shopping mall opened. By the mid-to-late-1990s, the city of Wausau began to purchase and develop parts of West Industrial Park to meet the needs of the expanding economy and companies. In the late 1990s, the city demolished a number of aging buildings on a square in the center of downtown, creating what is known locally as the 400 Block, an open, grassy block with paved sidewalks crossing it. The square is a focal point for summer festivals. In recent years Wausau has redone the 400 Block, adding a permanent stage and other renovations that in total cost $2 million.

By the end of the 20th century, Wausau began to implement the Wausau Central Business District Master Plan, which included redevelopment and economic restructuring of downtown Wausau. The tallest commercial building in Wisconsin outside of Milwaukee is located in Wausau, the 241-foot Dudley tower. Significant school construction in recent years has occurred in response to changing demographics. 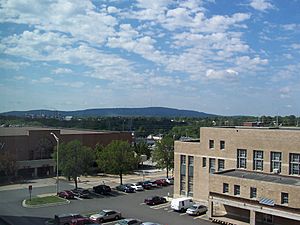 Wausau's climate is classified as halfway between temperate and subarctic (boreal and hemiboreal). It is built on or around a hemiboreal forest, which has some of the characteristics of a boreal forest and shares some of the features of the temperate zone forests to the south. Coniferous trees predominate in the hemiboreal zone, but a significant number of deciduous species are found there, as well.

The area has four distinct seasons. 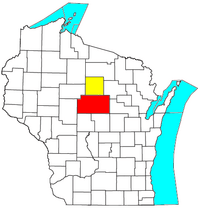 Wausau is the larger principal city of the Wausau-Merrill CSA, a Combined Statistical Area that includes the Wausau metropolitan area (Marathon County) and the Merrill micropolitan area (Lincoln County), which had a combined population of 155,475 at the 2000 census.

In 1996, a US census estimate found the Hmong people were the largest ethnic minority group in Wausau, with about 11% of the population.

There were 16,487 households of which 28.1% had children under the age of 18 living with them, 40.7% were married couples living together, 11.5% had a female householder with no husband present, 4.9% had a male householder with no wife present, and 42.9% were non-families. 35.4% of all households were made up of individuals and 13.1% had someone living alone who was 65 years of age or older. The average household size was 2.31 and the average family size was 3.02.

As of 2003 the Hmong Americans are the largest ethnic minority in Wausau. Churches and social service agencies settled refugees, most of them Hmong with some Vietnamese and Lao, in Wausau after the Vietnam War. According to the 1980 U.S. Census, the Wausau SMSA had fewer than 1% non-White people. There were several dozen immigrants in 1978. By 1980 Wausau had 200 immigrants. This increased to 400 in 1982 and 800 in 1984.

In 1981 there were 160 Hmong students in the Wausau School District and in 1991 1,010. In a period ending in 1994 the tax rate of the Wausau School District rose by 10.48% as a result of the expenses of services to children from immigrant families. The increase was three times as high as the increase in an adjacent school district without a large immigrant population. By 1994 Wausau had 4,200 refugees. By 1996 the number of Hmong students in the school district was over 2,000. In 1998 this number reached its peak, 2,214. The city experienced some social upheaval following the Hmong arrival. Some schools in Wausau had a minority of English speakers and some were predominantly Hmong students. Some native-born American families in Wausau criticized the crime and expenses in social services.

As of 2003, "Sixty percent of Hmong families are homeowners. Although more than half of the workforce is earning less than $8 an hour, the welfare rate has dropped to less than 5 percent. More people are going to college. And test scores and graduation rates of Hmong public school students are steadily rising."[needs update]

In Wausau there is relatively little Hmong-language media because for much of its history, the Hmong language was not written.

The city's 37 city parks, which total 337 acres (136 ha), are maintained by the Wausau and Marathon County Parks, Recreation, and Forestry Department.

Athletic Park, a baseball stadium on the east side of Wausau, is home to the Wisconsin Woodchucks baseball team.

Whitewater Park contains a third of a mile of Class I-II+ rapids along the Wisconsin River in downtown Wausau. It has bleachers facing whitewater rapids where recreational whitewater kayaking and canoeing take place.

Sylvan Hills is a county park within the Wausau city limits. During the winter, tubing takes place on hills that have vertical drops of up to 133 feet (41 m).

Marathon Park, another county park in the city of Wausau, is the location of the Wisconsin Valley Fair. The park includes camping grounds, two hockey rinks, a curling barn, playgrounds, an obstacle course, an amphitheater, a bandstand, a grandstand, exhibition buildings, a concessions building, and a miniature golf course. Marathon Park contains the southernmost section of old-growth forest remaining in Wisconsin. The Little Red School House is housed within the park. 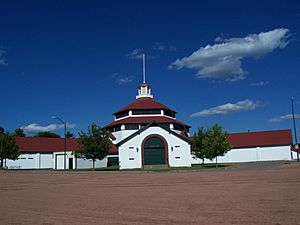 The Marathon County fairgrounds is listed on the National Register of Historic Places. 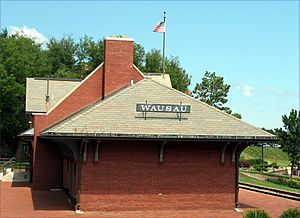 Grand Avenue turns into North 6th Street when travelling north into the downtown area. Business 51 is a major route designation that runs through the city mostly along the original route of US 51 before the freeway bypass was constructed in the 1960s. Entering from the south along Grand Ave, north to downtown then splitting into one way streets; northbound follows 6th St, McIndoe St, N. 1st St, and Scott St to the Wisconsin River; and southbound from the Wisconsin River along Washington St, 1st St, and Forest St back to Grand Ave. Once on the west side of the river, Scott St becomes Stewart Ave. Business 51 turns north off of Stewart Ave onto the one way 1st Avenue north to W. Union Ave westerly for 2 blocks then north out of town along Merrill Ave (southbound from Merrill Ave along 3rd Avenue, then East on Stewart Ave to the Wisconsin River).

All content from Kiddle encyclopedia articles (including the article images and facts) can be freely used under Attribution-ShareAlike license, unless stated otherwise. Cite this article:
Wausau, Wisconsin Facts for Kids. Kiddle Encyclopedia.