Abbotsford is a city in Clark (mostly) and Marathon counties in the U.S. state of Wisconsin. The population was 2,310 at the 2010 census. Of this, 1,616 were in Clark County, and 694 were in Marathon County. Abbotsford is nicknamed "Wisconsin's First City" due to its alphabetical place on a list of Wisconsin cities.

In 1872, the Wisconsin Central Railroad cleared its right of way through the forest which would become Abbotsford, heading north for Ashland. Rails were built through the town site in 1874. In 1879 the directors of the Wisconsin Central decided to build west from Colby to Chippewa Falls, to connect there with the Chippewa Falls & Western and ultimately St. Paul. However, they found that Colby Hill was not a good site for a junction and rail yard, so they instead planned the east-west line 2.5 miles north of Colby. The place was called Colby Junction from 1879 to 1880, then renamed for Edwin H. Abbott of the Wisconsin Central.

The city was incorporated in 1965.

According to the United States Census Bureau, the city has a total area of 2.71 square miles (7.02 km2), all of it land. 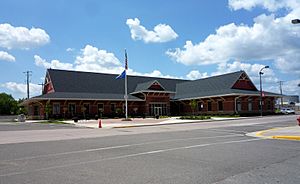 Abbotsford is part of the Wausau, Wisconsin Metropolitan Statistical Area.

There were 864 households, of which 33.9% had children under the age of 18 living with them, 51.2% were married couples living together, 8.8% had a female householder with no husband present, 5.9% had a male householder with no wife present, and 34.1% were non-families. 27.9% of all households were made up of individuals, and 14.3% had someone living alone who was 65 years of age or older. The average household size was 2.57 and the average family size was 3.14.

All content from Kiddle encyclopedia articles (including the article images and facts) can be freely used under Attribution-ShareAlike license, unless stated otherwise. Cite this article:
Abbotsford, Wisconsin Facts for Kids. Kiddle Encyclopedia.