American ginseng (Panax quinquefolius, Panacis quinquefolis) is a herbaceous perennial plant in the ivy family, commonly used as an herb in traditional medicine, including traditional Chinese Medicine. It is native to eastern North America, though it is also cultivated in China. Since the 18th century, American ginseng (P. quinquefolius) has been primarily exported to Asia, where it is highly valued for its cooling and sedative medicinal effects. It is considered to represent the cooling yin qualities, while Asian ginseng embodies the warmer aspects of yang.

The aromatic root of American ginseng (Panax quinquefolius) resembles a small parsnip that forks as it matures. The plant grows 6 to 18 in (15 to 46 cm) tall, usually bearing three leaves, each with three to five leaflets, 2 to 5 in (5 to 13 cm) long. 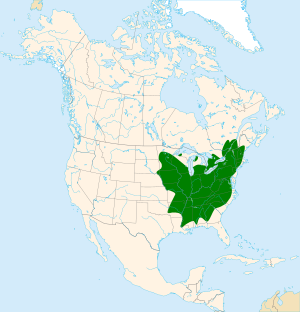 American Ginseng can be found in much of the eastern and central United States and in part of southeastern Canada. It is found primarily in deciduous forests of the Appalachian and Ozark regions of the United States. American ginseng is found in full shade environments in these deciduous forests underneath hardwoods. Due to this very specialized growing environment and its demand in the commercial market it has started to reach an endangered status in some areas. It can be found throughout eastern Canada and the northeastern United States.

In Canada, American ginseng is listed as endangered nationally and in Ontario, and as threatened in Quebec (the highest risk categories in both provinces).

The plant's root and leaves were used in traditional medicine by Native Americans. Since the 18th century, the roots have been collected by "sang hunters" and sold to Chinese or Hong Kong traders, who often pay high prices for particularly old wild roots. Originally, American ginseng was imported into China via subtropical Guangzhou, the seaport next to Hong Kong. Since American ginseng was originally imported into China via a subtropical seaport, Chinese doctors believed American ginseng must be good for yin, because it came from a hot area. They did not know, however, that American ginseng can only grow in temperate regions. Nonetheless, the root is legitimately classified as more yin because it generates fluids.

There is no evidence that American ginseng is effective against the common cold or how severe the infections are. There is tentative evidence that it may lessen the length of sickness when used preventively.

Cold-fX is a product derived from the roots of North American ginseng (Panax quinquefolius). The makers of Cold-fX were criticized for making health claims about the product that have never been tested or verified scientifically. Health Canada's review of the scientific literature confirmed that this is not a claim that the manufacturer is entitled to make.

Individuals requiring anticoagulant therapy such as warfarin should avoid use of ginseng. It is not recommended for individuals with impaired liver or renal function, or during pregnancy or breastfeeding. Other adverse effects include: headaches, anxiety, trouble sleeping and an upset stomach.

Recent studies have shown that through the many cultivated procedures that American ginseng is grown, fungal molds, pesticides, and various metals and residues have contaminated the crop. Though these contaminating effects are not considerably substantial, they do pose health concerns that could lead to neurological problems, intoxication, cardiovascular disease and cancer.

American ginseng was formerly particularly widespread in the Appalachian and Ozark regions (and adjacent forested regions such as Pennsylvania, New York and Ontario). Due to its popularity and unique habitat requirements, the wild plant has been overharvested, as well as lost through destruction of its habitat, and is thus rare in most parts of the United States and Canada. Ginseng is also negatively affected by deer browsing, urbanization, and habitat fragmentation. It can be grown commercially, under artificial shade, woods-cultivated, or wild-simulated methods, and is usually harvested after three to four years, depending on cultivation technique; the wild-simulated method often requires up to 10 years before harvest.

Ontario, Canada is the world's largest producer of North American ginseng. Marathon County, Wisconsin, accounts for about 95% of production in the United States. Woods-grown American ginseng programs in Vermont, Maine, Tennessee, Virginia, North Carolina, Colorado, West Virginia, and Kentucky, have been encouraging the planting of ginseng both to restore natural habitats and to remove pressure from any remaining wild ginseng.

American ginseng is listed in Appendix II of the Convention on International Trade in Endangered Species to control international trade.

All content from Kiddle encyclopedia articles (including the article images and facts) can be freely used under Attribution-ShareAlike license, unless stated otherwise. Cite this article:
American ginseng Facts for Kids. Kiddle Encyclopedia.