Stevens Point is the county seat of Portage County, Wisconsin, United States. The city was incorporated in 1858.

Stevens Point is home to the University of Wisconsin–Stevens Point and a campus of Mid-State Technical College.

Historically part of the Menominee homelands, a three-mile strip along the Wisconsin River was ceded to the United States in an 1836 treaty. In 1854 the Menominee made its last treaty with the U.S., gathering on a reservation on the Wolf River.

Stevens Point was named after George Stevens, who operated a grocery and supply business on the Wisconsin River during the extensive logging of interior Wisconsin. The river was used by logging companies to float logs to market. Loggers on the river found this a convenient stopping point, as the river bends slightly and the operation was from far upstream. The town developed from Stevens's post and was named for him.

In 1845, the postal service came to Stevens Point and with this improvement in communications, within twenty years, the population tripled.

In 1847, the first plat was laid out of what would become the City of Stevens Point, including what was then and now known as the Public Square. The town square originally was an area next to the Wisconsin River where professionals, craftsmen, businessmen and loggers gathered before their journey north or south on the river, bringing revenue to the area. As years went by, the area around the town square grew as logging increased.

Most buildings were first built with readily available wood. Many cases of early fires were reported from 1850–1890. Around 1880, buildings began to be built with materials such as brick and sandstone. Quarries in Ellis, Wisconsin opened.

Among households, 21.7% had children under the age of 18, 34.9% were married couples living together, 8.5% had a female householder with no husband present, 3.2% had a male householder with no wife present, and 53.3% were non-families. 34.9% of all households were made up of individuals and 11.2%had someone living alone who was 65 years of age or older. The average household size was 2.21 and the average family size was 2.87.

The Sisters of St. Joseph of the Third Order of St. Francis have their mother house in Stevens Point. Catholic parishes in the city include Holy Spirit, St. Stephen, St. Casimir, St. Peter, and St. Joseph. Lutheran and other Protestant churches are also present, along with members of the Bahá'í Faith.

A wide variety of Catholic and Lutheran churches spread throughout Stevens Point. Many of those churches date back to the early 20th century. Within the past century, other religious groups have made their mark on Stevens Point.

Stevens Point is home to a community theater group, Central Wisconsin Area Community Theatre (cwACT), a children's museum and a group of museums run by the Portage County Historical Society, including the Beth Israel Congregation Museum, located in the former synagogue. (The synagogue has been defunct since 1985.)

Religion plays a big role in the community. In 1847 the first recorded religious service was held near the town square with a pastor from Norway. As time went by, more religions joined the town square, and by 1900, Catholic, Lutheran, and Methodist churches and Jewish synagogues were established within one mile of the downtown area.

Most events happen near the downtown area, many at the newly transformed town square that was rebuilt in 2011. These include the annual Riverfront Rendezvous, Corn on the Curb, sculpture park summer celebration, Fourth of July parade, Krazy Days and Gather at the River. 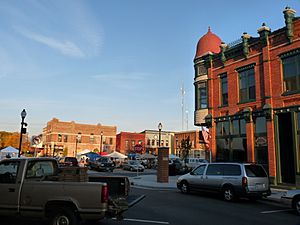 The downtown area was designated a "Wisconsin Main Street Community" and offers specialty shops and restaurants. Buildings in downtown Stevens Point are made from materials including Lake Superior limestone, brick, and red granite. The city and county administrative offices are located downtown, as well as a bank regional headquarters and two insurance companies. The downtown also offers night life on "the Square" that is popular with college students and a farmers' market that has been selling fresh produce for over one hundred years. The farmers' market is open early summer through early fall.

Stevens Point hosts the world's largest trivia contest, run by UWSP's radio station, WWSP-FM. The contest, which typically involves over 12,000 contestants in more than 400 teams, is held every year in April and lasts 54 consecutive hours, from Friday to Sunday.

The city is the setting for the first three seasons of the Disney Channel series Liv and Maddie.

The area hosts 20 developed parks, a 26-mile (42 km) bicycle and a jogging trail (the Green Circle Trail) that surrounds and winds through the city, and the Ice Age National Scenic Trail, which runs through the city. An 18-hole Robert Trent Jones, Jr.-designed golf course and country club, SentryWorld, is located at the Sentry Insurance Home Office. The Schmeeckle Reserve, a nature reserve, is located on the University of Wisconsin–Stevens Point campus.

The area also has Goerke Park, including a football stadium where middle school, high school and college athletes compete. An outdoor track is used by the same groups.

The Backwaters Paddle Quest canoe adventure challenge has been held in Stevens Point on the Wisconsin River since 2002, usually during the second week of August. Players paddle their crafts over two days past checkpoints along the river, encountering characters who act out a storyline that continues year to year.

All content from Kiddle encyclopedia articles (including the article images and facts) can be freely used under Attribution-ShareAlike license, unless stated otherwise. Cite this article:
Stevens Point, Wisconsin Facts for Kids. Kiddle Encyclopedia.