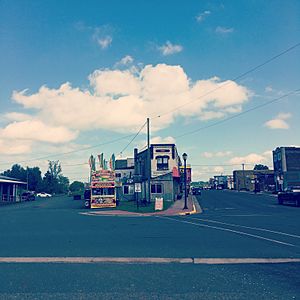 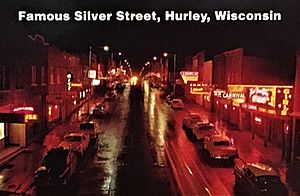 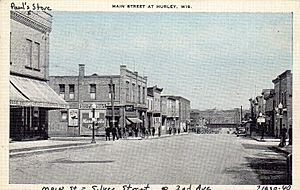 Hurley is a city in and the county seat of Iron County, Wisconsin, United States. The population was 1,547 at the 2010 census. It is located directly across the Montreal River from Ironwood, Michigan.

Hurley is located on the Montreal River, the border between Wisconsin and the Upper Peninsula of Michigan. It was founded to serve the interest of both lumbermen and miners. Hurley and adjacent Gile were lumber towns, while nearby mining towns included Montreal, Ironwood, Michigan, Bessemer, Michigan and Wakefield, Michigan.

Hurley took its name from M. A. Hurley, a prominent attorney of Wausau who won a lawsuit for the Northern Chief Iron Company in 1884. The compensation for winning the suit was that he asked for no fee, but only requested that the town involved in the case be named after him. The full name "Glen Hurley" was used for one year, but in 1885, the first name was dropped and the community became known as Hurley.

The Gogebic Range Directory of 1888 states: "During the past summer, Hurley was twice visited by terrible fires. The first occurred of June 28 and the second on July 9. These destroyed almost the entire business portion of the city, and at first it was thought that they would prove a crushing blow to its prosperity, but later events have proven that they were blessings in disguise. The wonderful pluck and energy of its businessmen were fully demonstrated when they at once began the erection of fine brick buildings in the place of the wooden ones destroyed. The result has been that the burned portion has been rebuilt with brick and stone, making them nearly fireproof. And Silver Street is one that a much larger city could well be proud of." 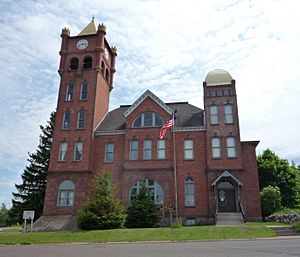 The Old Iron County Courthouse (now the Iron County Historical Museum), is listed on the National Register of Historic Places.[1]

The Iron Exchange Bank of Hurley, was the oldest bank of the Gogebic Range. It was organized November 26, 1885. Dr. J.C. Reynolds, the bank’s first president, and his brother, W. S. Reynolds, the bank’s first cashier, were the prime movers in the organization of the institution. Associated with them in the organization were John E. Burton, Alvin E. Tyler, Edward Ryan, Nathaniel J. Moore, James A. Wood, and Shepherd Homans, all men prominent in the mining industry in the area in the early days. By 1925, when it celebrated its 40th anniversary, it had withstood all financial depressions.

The first meat market in Hurley was kept by Ilsey and Knox and was opened in 1885.

The first hotel was located at the corner of Second Avenue and Silver Street in a log building, with James Guest as the first landlord. It was far from a pretentious affair but answered the purpose and furnished food and shelter for many a pioneer and miner in its day.

The Burton House was an immense four-story frame hostelry, which was a famous gathering place in the latter part of the 19th century. John E. Burton erected the building in 1865. A mining speculator, his original wealth came from the iron range. Later he established offices in New York City and bought up other vast mining interests in Mexico and South America. The Burton Hotel contained 100 rooms, a ballroom, dining room, café, and clubrooms, all highly decorated and furnished with the best of the wood workers’ art of the time, and equipped with the best furniture. The Burton Hotel cost $35,000 to construct, and the furniture cost Burton $10,000. Many noteworthy people stayed at the Burton House. Grover Cleveland registered at the Burton House Saturday, October 5, 1889. By that time he had already served one term as president of the United States. In 1889 when he was in Hurley, he was a New York lawyer. He was elected to the presidency again in 1892.

It is across the state border and the Montreal River from Ironwood, Michigan.

Hurley has a cool humid continental climate (Köppen Dfb), with long, cold winters and short, mild summers. In an average year the temperature drops below 32 °F (0 °C) on 192 days, and below 0 °F (-17.8 °C) on 40 days. Hurley is also one of the snowiest cities in the United States with an average of over 160 inches of snow per year.

There were 771 households, of which 20.6% had children under the age of 18 living with them, 31.1% were married couples living together, 10.0% had a female householder with no husband present, 5.6% had a male householder with no wife present, and 53.3% were non-families. 47.1% of all households were made up of individuals, and 23.1% had someone living alone who was 65 years of age or older. The average household size was 1.89 and the average family size was 2.66. 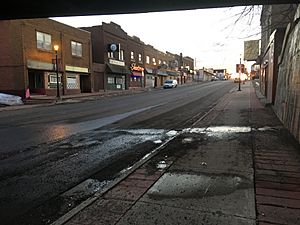 Hurley was served by the Chicago & North Western Flambeau Line with the Flambeau 400 train between Chicago and Ashland, and the Soo Line Railroad [formerly Minneapolis, St. Paul, and Sault Ste. Marie Railroad] between Minneapolis and Bessemer.

Hurley is known for its ATV Hurley Rally held on Memorial Day weekend, a Pumpkin ATV rally held the second weekend of October, and the Red Light Snowmobile Rally. Both attract thousands of visitors to the area each year. At the 2005 ATV rally, a new Guinness World Record was set for the largest ATV parade, with 687 participants. 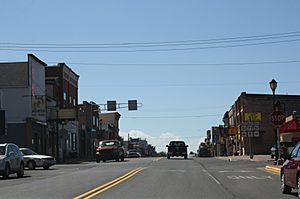 A fictionalized version of Hurley was the subject of Edna Ferber's 1934 novel Come and Get It. Ferber did most of her research for the novel while staying at Hurley's Burton House hotel.

Higher Education Gogebic Community College, a two year public community college, is located in adjacent Ironwood, Michigan. It was founded in 1932, and has a student body of approximately 1,000.

K-12 The Hurley K-12 School is located just outside of Hurley in the Town of Kimball. It was built in 1991 and serves students from Northern Iron County in Four Year Old Kindergarten through Grade 12. Approximately 550 students are enrolled as of the 2021-2022 school year.

At one time, a parochial school was maintained by St. Paul's Evangelical Lutheran Church (Wisconsin Synod)

Hurley won the Wisconsin State High School Boys Basketball Championship in 1949, defeating LaCrosse Logan by a score of 37-36. The head coach was Carl Vergamini. At the time, schools were not divided into divisions based on enrollment.

All content from Kiddle encyclopedia articles (including the article images and facts) can be freely used under Attribution-ShareAlike license, unless stated otherwise. Cite this article:
Hurley, Wisconsin Facts for Kids. Kiddle Encyclopedia.