Iron Mountain is a city in the U.S. state of Michigan. The population was 7,624 at the 2010 census. It is the county seat of Dickinson County, in the state's Upper Peninsula. Iron Mountain was named for the valuable iron ore found in the vicinity.

Iron Mountain is the principal city of the Iron Mountain, MI-WI Micropolitan Statistical Area, which includes all of Dickinson County, Michigan and Florence County in Wisconsin.

Iron Mountain hosts a few points of interest such as the Millie Hill bat cave, The Cornish Pump, and is located adjacent to Pine Mountain ski jump/ski resort, one of the largest artificial ski jumps in the world. It shares Woodward Avenue with the neighboring town, Kingsford. In addition, Iron Mountain is known for its pasties, Bocce Ball Tournaments, World Cup Ski Jumps, and Italian cuisine. Iron Mountain was also named a "Michigan Main Street" community by Michigan Governor Jennifer Granholm in 2006. It is one of only thirteen such communities in the State of Michigan in 2008. It is also the hometown of Michigan State University men's basketball coach Tom Izzo and former NFL head coach Steve Mariucci. 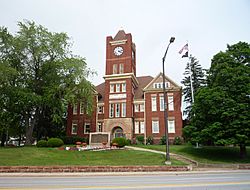 Dickinson County Courthouse and Jail, listed on the National Register of Historic Places.

There were 3,362 households of which 28.0% had children under the age of 18 living with them, 44.3% were married couples living together, 11.0% had a female householder with no husband present, 4.8% had a male householder with no wife present, and 39.8% were non-families. 34.2% of all households were made up of individuals and 13.4% had someone living alone who was 65 years of age or older. The average household size was 2.21 and the average family size was 2.83.

There were 3,458 households out of which 30.0% had children under the age of 18 living with them, 48.8% were married couples living together, 9.6% had a female householder with no husband present, and 37.9% were non-families. 33.3% of all households were made up of individuals and 16.2% had someone living alone who was 65 years of age or older. The average household size was 2.29 and the average family size was 2.94.

Iron Mountain's abandoned Millie Hill mine is home to one of the largest bat hibernacula in the Midwest. Roughly 25,000-50,000 bats make their winter home there. 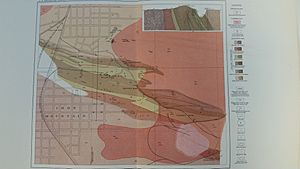 Iron Mountain is located within the Menominee Iron-Bearing District, which covers southern Dickinson County and extends westward into Iron County. Iron ore was discovered in Dickinson County in 1849 and Iron County in 1851. Ore is produced from the middle Precambrian Vulcan Iron-Formation around Iron Mountain, and the Riverton Iron-Formation between Iron River, Michigan and Crystal Falls, Michigan. Both formations belong to the Animikie Group. The Vulcan is between 300 and 800 feet thick and consists of hematite and magnetite with quartz, while the Riverton is 100–600 feet thick and consists of siderite and chert.

Iron Mountain was once a mining city when the Chapin Mine was up and running. The land that the Chapin Mine was formed on was discovered in 1879. It was discovered by two men, James John Hagerman and Dr. Nelson Powell Hulst. They had leased the land from a man from Niles, Michigan, Henry Chapin, hence the name of the mine. They began to sink shafts on the slope of Millie Hill. Then on July 5, 1879, Captain John Wicks and seven other men were sent into the forest with a wagon filled with tools to search for a place to set up camp. After numerous unsuccessful shafts the company was ready to shut down operation. Hagerman and Hulst had faith in the land and tried one more shaft. The shaft was 90 feet (27 m) deep and many months later, there was a successful hit that was at the heart of the iron ore. The original land was very swampy and filled with trees. To get rid of all this water the Chapin Mine Pumping Engine was created.

Iron Mountain is home of the largest steam-driven pumping engine in the United States. Chapin Mine Steam Pump Engine (Cornish Pump) was patterned after the ones used in Cornwall in the deep tin mines.

Edwin Reynolds, chief engineer for the E.P. Allis Company (now the Allis-Chalmers Co.) of Milwaukee, Wisconsin, designed the steam engine in 1890. The engine's high-pressure cylinder has a 50-inch (1,300 mm) bore, and the low-pressure cylinder is 100 inches (2,500 mm) in diameter. The flywheel is 40 feet (12 m) in diameter, weighs 160 tons, and had an average speed of only 10 revolutions per minute. The drive shaft to the flywheel is 24 inches (610 mm) in diameter. The engine itself rises 54 feet (16 m) above the floor of the room. The designers estimate the weight to be 725 tons over all.

The pumping equipment utilized a reciprocating motion to a line of steel rods extending 1,500 feet (460 m) down into the mine, with eight pumps attached at intervals of 170 to 192 feet (59 m) along the rods. Each of the pumps forced the water to the next higher pump and finally out to the surface of the mine.

As the engine was designed to run slowly, the pumps had a capacity of over 300 gallons per stroke of the pistons. At ten revolutions per minute, this meant over 3,000 gallons of water poured out through a 28-inch (710 mm) pipe every minute. A total of 5,000,000 gallons of water could be removed from the mine each day. At that time the pump's estimated cost was nearly $250,000.

After only a few years of successful operation, the giant pumping facility was moved from the "D" shaft of the Chapin Mine. More than a million tons of the best grade ore found in the entire mine was discovered directly below the pump, so it was essential that it be moved for excavation. In 1898 the pump was dismantled and stored away until 1907 when it was reassembled on the "C" shaft of the Chapin Mine. The pump operated here until 1932 when the Chapin Mine permanently closed its doors. In 1934 the pumping engine was offered to the County of Dickinson as a relic for sightseers to visit. The pump remained exposed to the elements for nearly 50 years, and in 1982 a building was constructed around the pump by the Menominee Range Historical Foundation. Today the Cornish Pumping Engine & Mining Museum exists on the site.

The Chapin Mine Pumping Engine (Cornish Pump) was designated as a National Historic Mechanical Engineering Monument by the American Society of Mechanical Engineers on June 6, 1987 and has been featured in the History Channel's Modern Marvels Series on the World's Biggest Machines.

This climatic region is typified by large seasonal temperature differences, with warm to hot (and often humid) summers and cold (sometimes severely cold) winters. According to the Köppen Climate Classification system, Iron Mountain has a humid continental climate, abbreviated "Dfb" on climate maps.

All content from Kiddle encyclopedia articles (including the article images and facts) can be freely used under Attribution-ShareAlike license, unless stated otherwise. Cite this article:
Iron Mountain, Michigan Facts for Kids. Kiddle Encyclopedia.