Logo of the National Public Radio

National Public Radio (NPR) is a free media organization. It is a nation syndicator to 797 public radio stations in the United States. It began in 1970. This was after the Public Broadcasting Act was passed in 1967. This act was signed by President Lyndon B. Johnson. NPR produces and spreads news and cultural programming. Most public radio stations broadcast some NPR programs. NPR is very popular. In 2005, NPR was voted the most trusted news source in the U.S. 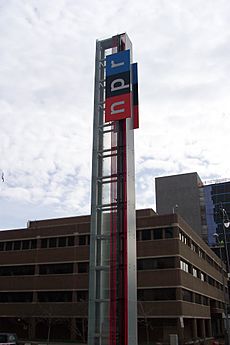 The following shows are made by NPR in their studios in Washington and Los Angeles:

NPR and the Gettysburg Address

William R. Rathvon is the only known eyewitness of the Gettysburg Address to have left an audio recording of what he remembered. One year before he died in 1939, Rathvon's remarks were recorded on February 12, 1938. It included his reading the address itself. The title of the record was "I Heard Lincoln That Day - William R. Rathvon, TR Productions". NPR found a copy during a "Quest for Sound" project in 1999. NPR allows people to hear the record around Lincoln's birthday.

All content from Kiddle encyclopedia articles (including the article images and facts) can be freely used under Attribution-ShareAlike license, unless stated otherwise. Cite this article:
National Public Radio Facts for Kids. Kiddle Encyclopedia.