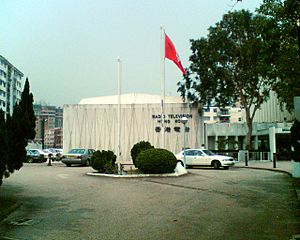 Public broadcasting includes radio, television and other electronic media outlets whose primary mission is public service. In much of the world, funding comes from the government, especially via annual fees charged on receivers. In the United States, public broadcasters may receive some funding from both federal and state sources, but generally most financial support comes from underwriting by foundations and businesses ranging from small shops to corporations, along with audience contributions via pledge drives. The great majority are operated as private not-for-profit corporations.

All content from Kiddle encyclopedia articles (including the article images and facts) can be freely used under Attribution-ShareAlike license, unless stated otherwise. Cite this article:
Public broadcasting Facts for Kids. Kiddle Encyclopedia.