For other rivers with the same name, including another one in Michigan, see Montreal River (disambiguation)

The Montreal River is a river flowing to Lake Superior in northern Wisconsin and the Upper Peninsula of Michigan in the United States. It is 47.8 miles (76.9 km) long and drains approximately 270 square miles (700 km2) in a forested region. For most of its length, the river's course defines a portion of the Wisconsin–Michigan border. The Ojibwe name for the river is Gaa-waasijiwaang, meaning "where there is whitewater". 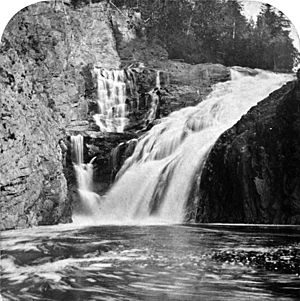 The Montreal River issues from Pine Lake in the town of Oma in eastern Iron County in northern Wisconsin. It flows initially northwardly to the boundary between Iron County and Gogebic County, Michigan, then northwestwardly along the state line, past the 'twin cities' of Hurley, Wisconsin and Ironwood, Michigan. Downstream of Ironwood and Hurley the Montreal River passes over four named waterfalls. Starting below U.S. Route 2 and going downstream (north), they are Peterson, Interstate, Saxon, and Superior Falls; the last two located just upstream of the river's mouth at Lake Superior. The river enters Oronto Bay on the southwestern shore of Lake Superior approximately 15 miles (24 km) northwest of Ironwood, at Michigan's westernmost point.

Both forks of the Montreal River flow through the Gogebic Range, a range of hills near Hurley and Ironwood. The rivers are located in the Laurentian Mixed Forest Province (north woods) region of the upper midwest.

All content from Kiddle encyclopedia articles (including the article images and facts) can be freely used under Attribution-ShareAlike license, unless stated otherwise. Cite this article:
Montreal River (Wisconsin–Michigan) Facts for Kids. Kiddle Encyclopedia.