Gogebic County ( goh-GHIB-ik) is the westernmost county in the Upper Peninsula in the U.S. state of Michigan. As of the 2020 Census, the population was 14,380. The county seat is Bessemer. This was historically part of the territory of the Lake Superior Band of Chippewa, which had twelve bands in Michigan, Wisconsin and Minnesota. The Lac Vieux Desert Indian Reservation is in this county, in Watersmeet Township; it is the land base of one of the federally recognized tribes.

Gogebic County was organized in 1887, partitioned from Ontonagon County. The county's name derives from a lake of the same name, which was originally rendered Agogebic. Sources agree that the name is from Ojibwe, but differ on the original meaning. The county's website suggests it meant "body of water hanging on high," but an 1884 military annal said it meant "water-mold lake" (Agogibing). (See also: List of place names of Native American origin in Michigan) 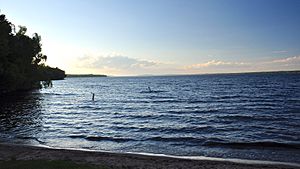 Lake Gogebic, the largest lake of the Upper Peninsula of Michigan, lies partially in Gogebic County. 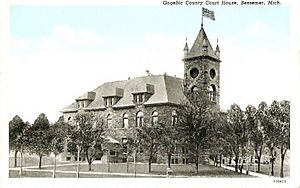 All content from Kiddle encyclopedia articles (including the article images and facts) can be freely used under Attribution-ShareAlike license, unless stated otherwise. Cite this article:
Gogebic County, Michigan Facts for Kids. Kiddle Encyclopedia.