Bessemer is a city in the U.S. state of Michigan. As of the 2020 census, the city population was 1,805. It is the county seat of Gogebic County.

The city is surrounded by Bessemer Township, but the two are administered autonomously. It is on U.S. Route 2 with Ironwood to the west and Wakefield to the east. The Big Powderhorn, Blackjack, and Indianhead ski areas are located within a few miles of Bessemer. Cross-country skiing and snowmobiling are also very popular in this area, due to lake-effect snow influenced by nearby Lake Superior; the area is often referred to as "Big Snow Country." Recreational opportunities in the summer months include Bluff Valley Park, the scenic Black River Falls, and access to the Iron Belle Trail. 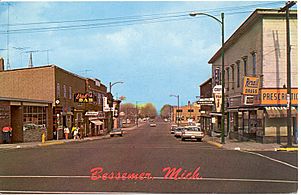 In 1880, a hunter and trapper Richard Langford, discovered iron ore under an overturned birch tree. However, Captain N. D. Moore is credited with disclosing the ore which led to the development of the Colby property. Mining began in 1883. By 1884, the Milwaukee Lake Shore and Western Railroad (later the Chicago and Northwestern) was being built from Antigo, WI to Ashland, WI by way of the new mines. The railroad company platted the town of Bessemer in 1884. On June 4, 1886 Gogebic County was separated from Ontonagon County. In March 1887, 360 voting members assembled and voted to organize the village of Bessemer. In the same year Gogebic County was officially created by the Michigan Legislature. Also in the year Bessemer and Ironwood called an election to see which city would be the county seat and also have the Gogebic County Courthouse. Ironwood men traveling to Bessemer to vote were made drunk and the train did not stop at the voting site. Ironwood lost and Bessemer gained the county seat. From 1884 to December 31, 1958, a period of seventy-five years, the iron ore shipment from all of Gogebic County totaled over 245 million tons. In 1966 the last mine in Bessemer-the Peterson Mine was closed. Many left the area to work in car factories in Kenosha, and the local economy underwent a serious decline.

According to the United States Census Bureau, the city has a total area of 5.47 square miles (14.17 km2), all land. Majority of Bessemer is situated on the north side of Colby Hill and the city consists of many hills and valleys.

There were 888 households, of which 24.5% had children under the age of 18 living with them, 42.9% were married couples living together, 10.6% had a female householder with no husband present, 4.1% had a male householder with no wife present, and 42.5% were non-families. 38.3% of all households were made up of individuals, and 19.4% had someone living alone who was 65 years of age or older. The average household size was 2.11 and the average family size was 2.76.

Commercial air service is available at the Gogebic-Iron County Airport (IWD) north of Ironwood. Air Choice One operates flights from Ironwood to Chicago and from Chicago to Ironwood daily. Flights to and from Minneapolis will be added beginning June 1, 2016.

All content from Kiddle encyclopedia articles (including the article images and facts) can be freely used under Attribution-ShareAlike license, unless stated otherwise. Cite this article:
Bessemer, Michigan Facts for Kids. Kiddle Encyclopedia.