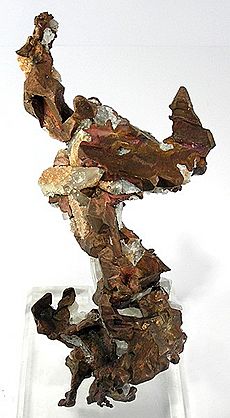 Ontonagon County ( ON-tə-NAH-gən) is a county in the Upper Peninsula of the U.S. state of Michigan. As of the 2020 Census, the population was 5,816, making it Michigan's third-least populous county. The county seat is Ontonagon. The county was set off in 1843, and organized in 1848. Its territory had been organized as part of Chippewa and Mackinac counties. With increasing population in the area, more counties were organized. After Ontonagon was organized, it was split to create Gogebic County. It is also the westernmost U.S. county that uses the Eastern Time Zone.

The county is named after the Ontonagon River. The name is said to be loosely derived from an Ojibwe language word noojitoon ziibi, meaning "hunting river." A French transliteration, Nantounagon, identified the river on a 1670 French map. Alternatively, and perhaps more accurately, it is said to be derived from the Ojibwa onagon, which means "dish" or "bowl." See List of Michigan county name etymologies.

At a longitude of 89.5°W, it is the westernmost county in the United States contained entirely within the Eastern Time Zone.

All content from Kiddle encyclopedia articles (including the article images and facts) can be freely used under Attribution-ShareAlike license, unless stated otherwise. Cite this article:
Ontonagon County, Michigan Facts for Kids. Kiddle Encyclopedia.