Keweenaw National Historical Park is a unit of the U.S. National Park Service. Established in 1992, the park celebrates the life and history of the Keweenaw Peninsula in the Upper Peninsula of the U.S. state of Michigan. As of 2009, it is a partly privatized park made up of two primary units, the Calumet Unit and the Quincy Unit, and 21 cooperating "Heritage Sites" located on federal, state, and privately owned land in and around the Keweenaw Peninsula. The National Park Service owns approximately 1,700 acres (690 ha) in the Calumet and Quincy Units. Units are located in Baraga, Houghton, Keweenaw, and Ontonagon counties.

The Congressional legislation establishing the Park stated, among other things, that:

(1) The oldest and largest lava flow known on Earth is located on the Keweenaw Peninsula of Michigan. This volcanic activity produced the only place on Earth where large scale economically recoverable 97 percent pure native copper is found.

(2) The Keweenaw Peninsula is the only site in the country where prehistoric aboriginal mining of copper occurred. Artifacts made from this copper by these ancient Indians were traded as far south as present day Alabama.

The Keweenaw Peninsula is the site of the most extensive known deposits of native copper in the world. Occurring here in relatively pure form, the red metal could be broken out of the rock and worked to make a wide variety of products, from jewelry and tools by its earliest miners to coins and electric wire by its final generations. Keweenaw copper was mined for approximately 7,000 years, from 5000 BCE until 1968. During the period for which records were kept, 1840–1968, more than 11 billion pounds (5 million metric tons) of copper were mined here. During the peak production years of World War I, 1916–1917, the annual copper yield reached a maximum of 270 million pounds (125,000 t).

"(7) The entire picture of copper mining on Michigan's Keweenaw Peninsula is best represented by three components: the Village of Calumet, the former Calumet and Hecla Mining Company properties (including the Osceola #13 mine complex), and the former Quincy Mining Company properties. The Village of Calumet best represents the social, ethnic and commercial themes. Extant Calumet and Hecla buildings best depict corporate paternalism and power, and the themes of extraction and processing are best represented by extant structures of the Quincy Mining Company."

Many ethnic groups contributed to the heritage of the Keweenaw National Historical Park. Throughout the later half of the 19th century and the first two decades of the 20th, century, immigrants from across Europe migrated to the Keweenaw to work in the copper mines and mining communities. By 1910 the Copper Country had been settled by French Canadian, German, Chinese, Irish, Cornish, Croatian, Finnish, Italian, Greek and Syrian people.

When news of the region's rich native copper was first widely published in the 1830s, many families from the English county of Cornwall immigrated to the Upper Peninsula, bringing the Cornish pasty and their region's knowledge of hard-rock mining with them. Several park Heritage Sites, including the log cabin village of "Old Victoria," recall Cornish heritage in the region.

Later in the 1800s, many families from Finland emigrated to the United States. Until 1918, Finland belonged to Russia as a Grand Duchy. A large percentage of these Finns settled in the Western Upper Peninsula because of perceived similarities between their old and new homes, and found work in the Keweenaw. Finnish saunas can still be found throughout the area. Several park Heritage Sites, including the "Hanka Homestead", recall the Finnish influx.

The Calumet Unit of the Keweenaw National Historical Park includes many sites in and around the villages of Calumet and Laurium, which are not ghost towns but operating human communities that have survived the shutdown of their parent employer, the Calumet and Hecla Mining Company, in 1968. By digging shafts into the rock, the men and owners of the Calumet & Hecla found geological formations of rock laced with nuggets of almost pure copper.

The Calumet & Hecla was the richest of the separate copper mines of the Keweenaw, and the towns built at the mine head reflect its productivity. A 1,200-seat opera house, large churches built of Lake Superior brownstone, and mansions built by the mining bosses survive as memories of the Calumet mine's glory years.

The Quincy Unit of the Keweenaw National Historical Park commemorates one of the most remarkable feats of engineering in northern Michigan, the 9,000-foot (2,700 m) deep Quincy Mine shaft. Nicknamed "Old Reliable" for its record of paying annual dividends for decades, the Quincy mine enjoyed a position on the rich copper rock of the Pewabic Lode. A private preservation foundation maintains the Quincy Mine's surface mine hoist, which is the largest steam-powered hoist in the world.

As of 2013, the Keweenaw National Historical Park operates in cooperation with 21 heritage sites in the Keweenaw Peninsula and nearby. The heritage site system was established in 2007 with an original set of 19 sites. In October 2013, two new sites were added: Houghton's Carnegie Museum and the Michigan Technological University Archives.

The A.E. Seaman Mineral Museum was located on the Fifth Floor of Electrical Resource Center at Michigan Technological University in Houghton, Michigan. As of 2011, it is now located across from the Advanced Technology Development Complex. The museum is named for Arthur Edmund Seaman, who worked at Michigan Tech in the late 19th and early 20th centuries, and was the museum's curator from 1928–1937.

The Carnegie Museum in Houghton is a former Carnegie library and former home of the Portage Lake District Library. It is currently a museum focusing on local history.

The Calumet Theatre is located at 340 Sixth Street in Calumet, Michigan, within the park's Calumet Unit. The theatre was built in 1899 and opened on March 20, 1900. It is the first municipally built theatre in the country. The theatre originally housed live theatre, attracting notable performers such as Frank Morgan (later famous for his roles in The Wizard of Oz), Douglas Fairbanks, Sr., Lon Chaney, Sr., John Philip Sousa, Sarah Bernhardt, and Madame Helena Modjeska among others. However, in the late 1920s, the theatre converted to a movie house, serving in this medium until the 1950s. Summer stock theatre was brought back to the Calumet Theater in 1958, and performed there every summer until 1968, and returned in 1972.

In 1975, the auditorium was restored for the centennial of Calumet. In 1988−89, the exterior of the theatre was restored. In 1983, the Calumet Theatre Company was incorporated as a non-profit organization. The staff consists mostly of volunteers, though there are eight full-time staff members. Today, the Calumet Theatre is home to as many as 80 theatre-related events a year, with an estimated 20,000 people attending.

The Chassell Heritage Center is located at 42373 Hancock Street in Chassell, Michigan. The heritage center, located in a 1917 elementary school building, features exhibits that trace Chassell's history from a fishing and lumber town up to the present. It includes the Chassell Township Museum and the Friends of Fashion Vintage Clothing Collection

The Coppertown USA Museum is located at 25815 Red Jacket Road in Calumet, Michigan, within the park's Calumet Unit. Coppertown USA is housed within the Calumet & Hecla Mining Company's old pattern shop. Exhibits span the range of the copper mining timeline, from prehistoric times to the present, but concentrate on the operations of the Calumet & Hecla Mining Company.

The Delaware Copper Mine is located off U.S. Highway 41 (US 41), 12 miles (19 km) south of Copper Harbor, Michigan. The Delaware Copper Mine provides tours of one of the oldest copper mines in the Keweenaw, dating back to 1846. The mine had five shafts, with the deepest reaching 1,400 feet (430 m). The mine is open June through October and offers guided and self-guided tours.

Fort Wilkins Historic State Park is located on US 41 in Copper Harbor, Michigan. The fort was built in 1844, and provided order and protected the Keweenaw's copper resources during the Civil War. The park also contains one of the first lighthouses on Lake Superior, and offers camping, fishing, hiking, swimming, and biking, and day-use facilities.

The Hanka Homestead is located approximately 3 miles (4.8 km) west of U.S. Highway 41, off Tower Road in Pelkie, Michigan. The Hanka Homestead is a Finnish-American "stump farm" homestead originally settled around the turn of the twentieth century. The farm was lived in by members of the Hanka family until 1966; the farm has been restored to its appearance in 1920.

The Keweenaw County Historical Society, established in 1981, has five locations throughout Keweenaw County, Michigan. These locations include the Eagle Harbor Lighthouse, Central Mine Historic District, Phoenix Church, the Rathbone School and the Bammert Blacksmith Shop. Visitor Centers for the Historical Society are located at the Eagle Harbor Lighthouse and Central Mine. Their sites are open from June through October.

The Keweenaw Heritage Center is located in the old Ste. Anne's church at 25880 Red Jacket Road in Calumet, Michigan, within the park's Calumet Unit. Ste. Anne's was built in 1900 as a French Canadian Roman Catholic church and deconscrated in 1966. It was underutilized for a number of years until, in 1994, a group of local citizens bought the building. The Keweenaw Heritage Center's mission is to "preserve and interpret the culture and heritage of the Copper Country through the preservation of buildings, development of exhibits and other educational activities." A major museum on the first floor is planned.

The Laurium Manor Inn is located at 320 Tamarack Street in Laurium, Michigan. The 13,000-square-foot (1,200 m2) structure was built as a home by wealthy mining captain Thomas H. Hoatson in 1908 at a cost of $50,000. The house functions as a bed and breakfast and is open to the public for tours.

The Michigan Technological University Archives, housed in the university library, store many documents related to the history of the area.

Old Victoria is located at Victoria Dam Road in Rockland Township, Michigan. The site features a group of small log houses which were once used by miners of the Victoria Mining Company. These cabins were built in 1899 and abandoned in 1921. The structures were restored in the 1970s, and tours through the cabins and the mine site beyond are available.

The Ontonagon County Historical Society is located at 422 River Street in Ontonagon, Michigan. The Ontonagon County Historical Society was founded in 1957 "to collect and preserve the artifacts of the county's history and to educate the public about that history and related topics." Exhibits at the historical society's museum include artifacts related to the early days of mining and other topics. The Society also operates the Ontonagon Lighthouse, constructed in 1851–52. The Society acquired the lighthouse in 2000, and offers tours in the summer months.

Quincy Mine Hoist and Underground Mine

The Quincy Mine Hoist and Underground Mine is located at 49750 US 41 in Hancock, Michigan, within the park's Quincy Unit. The company offers tours through the surface buildings of the Quincy Mine as well as underground tours. 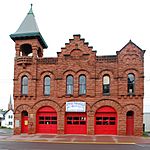 The Upper Peninsula Firefighters Memorial Museum is located at 327 Sixth Street in Calumet, Michigan, within the park's Calumet Unit. The second floor of the building holds exhibits on the history of fire fighting in Michigan's Upper Peninsula.

All content from Kiddle encyclopedia articles (including the article images and facts) can be freely used under Attribution-ShareAlike license, unless stated otherwise. Cite this article:
Keweenaw National Historical Park Facts for Kids. Kiddle Encyclopedia.