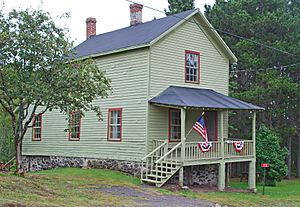 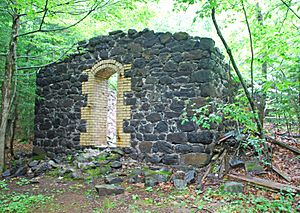 The Central Mine Historic District covers the remains of the nearly abandoned mining town of Central. The district includes around 20 frame structures from an original 130, as well as scattered ruins. Most remaining structures are frame, two-story company houses on stone foundations. These houses all have gable roofs, porches, and lean-to additions. The district also contains the well-maintained Central Mine Methodist Church, which is in nearly original condition.

In 1854, John Shawson, an agent of the Cliff Mine, discovered native copper in the bottom of an ancient pit (apparently dug by Native Americans) several miles from Cliff Mine. The Central Mining Company was organized in 1854 for the purpose of mining copper in the Keweenaw. Mining began in 1856, and the mine's lode proved so rich that Central became was able to turn a profit in its first year of operation. Between 1856 and between then and the end of the 19th century the company built over 130 structures for the mine and the community of workers. At the peak of production in 1868, the town of Central was home to over 130 people, primarily immigrants from Cornwall, England. The mining industry eventually contracted, and by 1887 the Central Mine was the only fully operational mine in Keweenaw County. In 1898 the mine ceased operation, and residents began leaving the town. The last permanent resident left in 1952, although some structures in the area are still used as summer cottages. 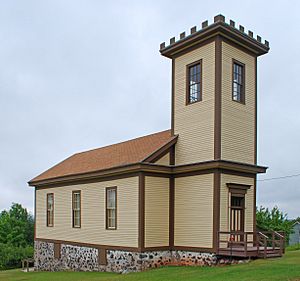 Central Mine and Village

The Keweenaw County Historical Society owns 38 acres of the old Central site and operates the Central Mine Visitor's Center which features exhibits about the mine and village. Some of the residences can be visited or are being restored.

All content from Kiddle encyclopedia articles (including the article images and facts) can be freely used under Attribution-ShareAlike license, unless stated otherwise. Cite this article:
Central Mine Historic District Facts for Kids. Kiddle Encyclopedia.