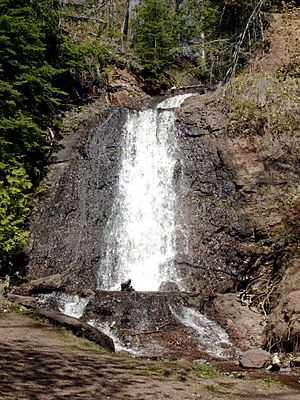 Keweenaw County is a county in the Upper Peninsula of the U.S. state of Michigan, the state's northernmost county. As of the 2010 census, the population was 2,156, making it Michigan's least populous county. It is also the state's largest county by total area (including waters of Lake Superior). The county seat is Eagle River.

The county was set off and organized in 1861. It is believed "Keweenaw" is a Native American word that means "portage or place where portage is made". Keweenaw County is part of the Houghton, Michigan, Micropolitan Statistical Area. Isle Royale, a national park which no longer has year-round inhabitants, was a separate county that was incorporated into Keweenaw County in 1897.

Two land masses comprise most of the land portion of the county: Isle Royale and the northeastern half of the Keweenaw Peninsula. The county also includes the waters of Lake Superior between the two, extending to the state's water borders with Ontario and Minnesota. It is thus the largest county in Michigan by total area, at 5,966 square miles (15,450 km2), of which 540 square miles (1,400 km2) is land and 5,426 square miles (14,050 km2) (91%) is water. Of all counties (or equivalents) in the United States, Keweenaw County has the highest proportion of water area to total area.

The largest lake entirely within the county is Gratiot Lake at 1,438 acres (5.82 km2), located at the base of the county's two highest peaks: Mt. Horace Greeley at 1,550 feet (470 m) and Mt. Gratiot at 1,490 feet (450 m). Other lakes include Lac La Belle near Bete Grise Bay, Lake Medora, Lake Fanny Hooe near Copper Harbor, Lake Bailey at the base of Mt. Lookout, and Schlatter Lake at the tip of the peninsula.

There were 1013 households out of which 16.8% had children under the age of 18 living with them, 52.4% were married couples living together, 4.9% had a female householder with no husband present, and 39.4% were non-families. 34.2% of all households were made up of individuals and 15.0% had someone living alone who was 65 years of age or older. The average household size was 2.12 and the average family size was 2.71.

All content from Kiddle encyclopedia articles (including the article images and facts) can be freely used under Attribution-ShareAlike license, unless stated otherwise. Cite this article:
Keweenaw County, Michigan Facts for Kids. Kiddle Encyclopedia.