Copper Harbor is a small unincorporated community in northeastern Keweenaw County in the U.S. state of Michigan. It is within Grant Township on the Keweenaw Peninsula which juts out from the Upper Peninsula of Michigan into Lake Superior.

The town's name alludes to the former use of its harbor as a port for shipping copper mined from local deposits during the mid-19th century.

The Pittsburgh and Boston Mining Company, formed by John Hays of Cleveland, Ohio, began operating in Copper Harbor in 1844. It was a small development at first, but its mine was modern for its time, and the company struck it rich in 1845. A few years later, the Central and other mines opened and became successful. By 1870, the copper resources had been largely worked out.

Mining activity no longer exists, and the town's harbor is mostly used for recreational purposes such as snowmobiling and for a ferry that connects Isle Royale National Park to northern Michigan.

The Copper Harbor Lighthouse is situated at the opening of the harbor. Nearby is Fort Wilkins Historic State Park, a restored 1844 frontier army base originally built to protect the port in the early years of the copper mining boom.

The town is the northern terminus of US 41 (both in Michigan and nationally) and the eastern terminus of M-26. Both approaches to Copper Harbor, the shore-hugging M-26 from Eagle Harbor and the more inland, rugged US 41 offer dramatic views, as does the Brockway Mountain Drive overlook. Also, one can follow Manganese Road from the town's center to Manganese Falls and the Estivant Pines, among the oldest and tallest remaining strands of virgin white pines in Michigan.

Copper Harbor as seen from the harbor in 2012 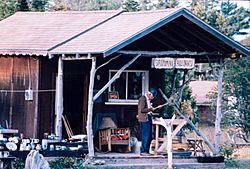 A gift shop in Copper Harbor

Copper Harbor has a humid continental climate. Summers are warm but rarely hot due to the moderating influence of Lake Superior, whilst winters are cold and snowy, albeit milder than areas on similar parallels to the west, due to the low-scale maritime moderation. Although winter temperatures are similar to those in nearest large metropolitan city Minneapolis a couple of degrees latitude south-west, the main difference being that March is also a winter month in Copper Harbor, since the marine effects delay spring.

All content from Kiddle encyclopedia articles (including the article images and facts) can be freely used under Attribution-ShareAlike license, unless stated otherwise. Cite this article:
Copper Harbor, Michigan Facts for Kids. Kiddle Encyclopedia.