Fort Wilkins Historic State Park is a historical park operated by the Michigan Department of Natural Resources at Copper Harbor, Michigan. The park preserves the restored 1844 army military outpost, Fort Wilkins, which was placed on the National Register of Historic Places in 1970. The state park's 700 acres (280 ha) include camping and day-use facilities as well as the Copper Harbor Lighthouse, built in 1866. The park is a "Cooperating Site" of the Keweenaw National Historical Park.

Copper Harbor is located at the northern tip of the Keweenaw Peninsula, bordering Lake Superior. It is one of the best natural harbors in Keweenaw County and was a quick focus of attention after copper was discovered on the peninsula in the 1830s. In the early 1840s, a copper rush took place that saw a flood of fortune-seekers moving to the peninsula. The U.S. government was concerned about possible disorder and violence, and lake shipping interests asked the government to build an aid to navigation so that essential supplies could be shipped in and the copper moved out. In 1844, Fort Wilkins was established at the direction of Secretary of War William Wilkins. 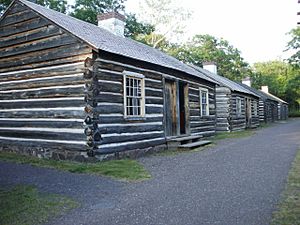 The U.S. Army occupied Fort Wilkins, located east of Copper Harbor, Michigan on the strait of land between Copper Harbor and northern shore of Lake Fanny Hooe, in 1844. The troops stationed there were intended to help with local law enforcement and to keep the peace between miners and the local Ojibwas; some Chippewa opposed the Treaty of La Pointe that had ceded the area to the United States in 1842–1843.

When it was first garrisoned in 1844, two companies (A and B of the 5th infantry) were stationed there. When war was declared with Mexico, Companies A and B were sent to Texas and were replaced by Company K. When Company K was also sent to the Mexican front in 1846, the fort was left in the hands of a single caretaker, Sgt. William Wright, the only man to remain behind.

With the passing of Wright in 1855, the fort was leased to Dr. John S. Livermore, who hoped to open a health resort "for invalids and others during the hot months." This plan fell through after his death in 1861.

After the American Civil War, the U.S. army reoccupied Fort Wilkins for three years in 1867–1870. The U.S. Army needed a place for men to serve out the rest of their enlistments from the war. Company E, Forty-third Infantry, was stationed there from 1867 until May 1869, when they were replaced by Company K, First Infantry. The army permanently abandoned the facility at the end of August 1870. 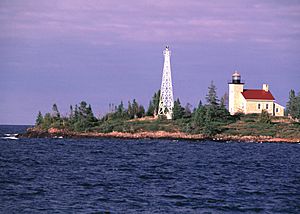 In 1848, the Copper Harbor Lighthouse complex was begun on the tip of the eastern point of land, also sometimes called Hays Point, that sits at the entrance of the harbor. In 1923, the fort and adjacent lighthouse became a Michigan state park. The facility is open to the public in summer months, when it is staffed by costumed personnel who portray Army life during the fort's final summer as an active post.

All content from Kiddle encyclopedia articles (including the article images and facts) can be freely used under Attribution-ShareAlike license, unless stated otherwise. Cite this article:
Fort Wilkins Historic State Park Facts for Kids. Kiddle Encyclopedia.