The name Ahmeek is derived from the Ojibwe (Chippewa) language. The village takes its name from the Ojibwe word, amik, which means "Beaver", and it was named so because of an abundance of beavers in the vicinity of the present-day village.

The Ahmeek Mine was the most successful mine along the Kearsarge Amygdaloid Lode, which spans through Houghton and Keweenaw Counties, as well as the most profitable, and the largest producer along the lode. The Ahmeek Mine's Shaft's No. 3 & 4 were also one of the most distinctive in all of the Copper Country.

The Ahmeek Mining Company opened in 1903. The local area grew because of its location on the Mineral Range Railroad. The village of Ahmeek was founded by Joseph Bosch in the year of 1904. Attorney James A. Hamilton became the first postmaster of Ahmeek on February 5, 1909, the same year in which it was incorporated as a village.

During the hate-filled Copper Country Strike of 1913–1914, the village of Ahmeek was the scene of much activity and conflict.

Leadership of the Western Federation of Miners (WFM) in the Keweenaw was more nearly indigenous than anywhere else within the strike zone. Sydney Thomas, born in England, and Andrew Pietala, a Finnish socialist, were the president and secretary, respectively, of the Keweenaw WFM local at Ahmeek. But the leaders of the strikers were, in James MacNaughton's description, "an Irish bunch called Dunnigan; they are perfect fire eaters." Patrick "Paddy" Dunnigan and his father, John Dunnigan, were miners. John Dunnigan had, as Paddy said,been elected as the mine inspector in Keweenaw County in opposition to the "bosses' wills." The elder Dunnigan had managed to Ahmeek WFM store, drawing $150 a month for that in addition to his $1,700 yearly pay as mine inspector, WFM critics pointed out. Paddy headed various morning parades by giving "that fire bell a couple of dings" and when the Ahmeek village marshal, Timothy O'Brien, objected, O'Brien was removed from his position. Dunnigan then became the marshal. Village President Morris Kennell was forced to resign. Mike Reilly, Dunnigan's brother-in-law, and then Alfred Haddy, a miner, then succeeded him.

The raid at Ahmeek 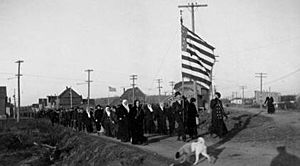 A parade of strikers headed by women of the Western Federation of Miners parade on a morning in October 1913 in Ahmeek, Michigan. It wasn't uncommon to have women and children at the front of such parades.

When Paddy Dunnigan of Ahmeek heard of the raid at South Range, he allegedly exclaimed that "we have three-hundred rifles right here and if any of the officers of Houghton and Keweenaw County can get them without bloodshed, to give them to the Citizens Alliance to shoot us." Five days later, Ahmeek, which was at the time often described as "the hotbed of the federation in Keweenaw County," was raided. Militiamen and mounted police cordoned the village during the search. The dragnet only picked up nine riot sticks, two rifles, three shotguns, one revolver, and one-hundred feet of fuse. Except for one shotgun, all of the yield came from saloons that were ran by Joseph Lesh and Frank Malner. The fuse, said Malner, was something he used on his personal farm. The weapons were used for protection. Neither saloonkeeper could explain the presence of the riot sticks. Frustrated officials believed that, in anticipation of the raid, the majority of the weapons in the village had been removed.

Dunnigan was arrested on a charge by Deputy J.H. Davis of taking a revolver from him several weeks earlier. His bond was set at $500. Joseph Dunnigan, Paddy's eighteen-year-old brother who daily had carried mail from the station to the Ahmeek postoffice, was interrupted that day by the law. He had heard noise at about 7:00 AM and went out into the yard to investigate. There, Marshal Wills collared and detained him within a soldiers' tent until nine o'clock though Dunnigan protested that the mail had to be delivered at 8:20 AM. 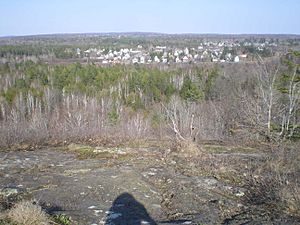 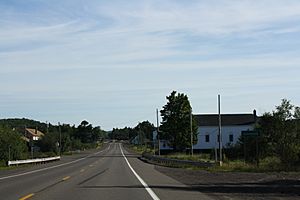 According to the United States Census Bureau, the village has a total area of 0.07 square miles (0.18 km2), all land.

The Lower Falls is an area tourist attraction.

There were 73 households, of which 21.9% had children under the age of 18 living with them, 32.9% were married couples living together, 12.3% had a female householder with no husband present, 6.8% had a male householder with no wife present, and 47.9% were non-families. 38.4% of all households were made up of individuals, and 12.3% had someone living alone who was 65 years of age or older. The average household size was 2.00 and the average family size was 2.63.

All content from Kiddle encyclopedia articles (including the article images and facts) can be freely used under Attribution-ShareAlike license, unless stated otherwise. Cite this article:
Ahmeek, Michigan Facts for Kids. Kiddle Encyclopedia.