Not to be confused with Cook, Minnesota in Saint Louis County.

Cook County is a county located in the U.S. state of Minnesota. As of the 2010 census, the population was 5,176, making it the fifth-least populous county in Minnesota. Its county seat is Grand Marais. The Grand Portage Indian Reservation is entirely within the county.

The first inhabitants of what is now Cook County, Minnesota were the Ojibwe people.

The Yankee migration to Minnesota was a result of several factors, one of which was the overpopulation of New England. The old stock Yankee population had large families, often bearing up to ten children in one household. Most people were expected to have their own piece of land to farm, and due to the massive and nonstop population boom, land in New England became scarce as every son claimed his own farmstead. As a result, there was not enough land for every family to have a self-sustaining farm, and Yankee settlers began leaving New England for the Midwestern United States.

They were aided in this effort by the construction and completion of the Erie Canal which made traveling to the region much easier, causing an additional surge in migrants coming from New England. Added to this was the end of the Black Hawk War, which made the region much safer to travel through and settle in for white settlers.

In the case of Cook County, most of its New England settlers came from Orange County, Vermont and the region of Down East Maine (modern day Washington County and Hancock County). Most of these settlers were fishermen and farmers. By 1845 there were roughly 350 people of European descent in what is now Cook County, virtually all from New England. By the time the county was founded in 1874, this number had risen to about 2,000.

These settlers were primarily members of the Congregational Church, though due to the Second Great Awakening, many of them had converted to Methodism, and some had become Baptists before coming to what is now Cook County. The Congregational Church has subsequently gone through many divisions, and some factions, including those in Cook County, are now known as the Church of Christ and the United Church of Christ.

When the New Englanders arrived, there was nothing but dense virgin forest and wild prairie. They laid out farms, constructed roads, erected government buildings and established post routes. Their presence led immediately to the establishment of a thriving fishing community, much like those they had left behind in Maine.

Though they were prosperous, there was also shortages of land. For most of the nineteenth century the majority of men born in what is now Cook County would end up leaving the area during their early adulthood to settle permanently elsewhere. By 1900 there were roughly 3,000 people in Cook County, despite many more people having been born there.

Between 1901 and 1905 European immigrants began to arrive in large numbers. They mostly came from Germany and Scandinavia, though some also came from Ireland (immigrants from these places arrived in southern Minnesota in earlier decades). They introduced Lutheranism and Catholicism to Cook County.

Cook County is in the extreme northeast of the state at the tip of the Arrowhead region; it is adjacent to only one other county by land. Its geographic neighbors are:

Northern Minnesota offers extreme winter weather. While the averages are low, the extremes provide more details. A third of the year is below freezing (31.9%, 116 days, or 4 months). Of those days, 21 are below zero degrees Fahrenheit (−17.8 °C). 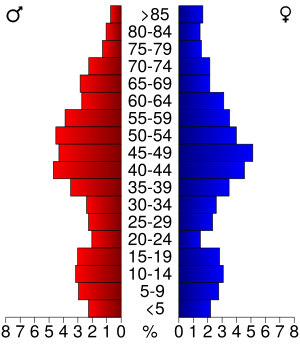 All content from Kiddle encyclopedia articles (including the article images and facts) can be freely used under Attribution-ShareAlike license, unless stated otherwise. Cite this article:
Cook County, Minnesota Facts for Kids. Kiddle Encyclopedia.