Grand Marais is a city in Cook County, Minnesota, United States. The population was 1,351 at the 2010 census. It is also the county seat and sole municipality of Cook County. Grand Marais is French for "Great Marsh", referring to a marsh that, in early fur-trading times, was 20 acres (8.1 ha) or less in area, nearly at the level of Lake Superior, and situated at the head of the little bay and harbor that led to the settlement of the village there. Another small bay on the east, less protected from storms, is separated from the harbor by a slight projecting point and a short beach. The Ojibwe name for the area is Gichi-biitoobiig, which means "great duplicate water," "parallel body of water" or "double body of water" (like a bayou), a reference to the two bays which form the large harbor off Lake Superior.Located on the east side of Grand Marais is Chippewa City. Chippewa City thrived in the 1890s, with about 100 families living in the village. It was thought that this town would never dwindle. However, much of this community's room for housing was removed when Highway 61 was built through it. Grand Marais is a gateway to the Boundary Waters Canoe Area Wilderness. It is also a regional arts and crafts hub, as the home of nonprofit educational institutions, such as the Grand Marais Art Colony and the North House Folk School, and art galleries featuring the work of local and regional artists. Grand Marais is also the hometown of 300 Entertainment recording artist Cobi.

According to the United States Census Bureau, the city has a total area of 2.90 square miles (7.51 km2), all of it land. Grand Marais is located on the northwestern shore of Lake Superior in northeastern Minnesota. It is an entry point for the Boundary Waters Canoe Area Wilderness, situated at the beginning of the Gunflint Trail. The Superior Hiking Trail passes near Grand Marais, and Judge C. R. Magney State Park is nearby, with its unusual Devil's Kettle waterfalls.

The land surrounding Grand Marais slopes up to form the Sawtooth Bluff, a dramatic rock face visible from nearly any vantage point in the city. Adjacent to the bluff is Pincushion Mountain, a large bald monolith with dramatic views of Lake Superior and the inland wilderness.

Grand Marais Harbor is protected by Artist's Point, a barrier island formed by lava that was connected to the mainland by gravel deposited by lake currents, forming a tombolo. An Arctic–alpine disjunct community survives there.

Road access to Grand Marais is by Minnesota Highway 61, which heads northeast, following the shore of Lake Superior, and is known as the North Shore Scenic Drive. The Gunflint Trail (Cook County Road 12) begins in Grand Marais and heads northwest, away from the lake and into the Boundary Waters region.

Grand Marais is located 110 miles northeast of Duluth and 40 miles southwest of the Canada–US border.

Grand Marais has a warm-summer humid continental climate (Köppen Dfb), like the rest of northern Minnesota. Because of the moderating influence of Lake Superior, summer temperatures are cooler, winter temperatures warmer, and the seasonal temperature difference is smaller than locations farther inland. With average highs of a little over 70 °F (21 °C) in July and August, Grand Marais has the coolest summer temperatures of any weather station in Minnesota. The difference between the temperature of the warmest and coldest months is only 47.6 °F (26.4 °C), significantly smaller than 58.9 °F (32.7 °C), the seasonal temperature difference in Tower, Minnesota, about 90 miles (140 km) to the west. Despite being significantly farther north, Grand Marais lies in USDA hardiness zone 4b like Duluth and Minneapolis, with an average yearly minimum temperature of −23 °F (−31 °C).

There were 673 households, of which 21.5% had children under the age of 18 living with them, 37.1% were married couples living together, 9.4% had a female householder with no husband present, 2.7% had a male householder with no wife present, and 50.8% were non-families; 43.7% of all households were made up of individuals and 18.6% had someone living alone who was 65 years of age or older. The average household size was 1.94 persons, and the average family size was 2.67. 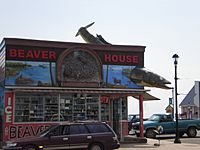 There were 645 households, of which 23.3% had children under the age of 18 living with them, 42.9% were married couples living together, 8.1% had a female householder with no husband present, and 47.1% were non-families; 42.0% of all households were made up of individuals, and 21.6% had someone living alone who was 65 years of age or older. The average household size was 2.01 and the average family size was 2.73.

Grand Marais is host to numerous festivals throughout the year. These festivals celebrate the unique history and culture of the North Shore and of the city itself.

All content from Kiddle encyclopedia articles (including the article images and facts) can be freely used under Attribution-ShareAlike license, unless stated otherwise. Cite this article:
Grand Marais, Minnesota Facts for Kids. Kiddle Encyclopedia.