Down East facts for kids

Kids Encyclopedia Facts
For other uses, see Down East (disambiguation).

"Down East", also "Downeast", is a term referring to parts of eastern coastal New England and Canada, particularly the U.S. state of Maine and Canada's Maritime Provinces, an area that closely corresponds to the historical French territory of Acadia. The phrase apparently derives from sailing terminology: sailors from western ports sailed downwind toward the east to reach the area.

A person from this area may be called a down-easter. Within Maine, the phrase "Down East" may refer specifically to the state's easternmost regions, also called Down East Maine.

The origin of the phrase "Down East" is typically traced to nautical terminology referring to direction, rather than location. In the warm months most suitable for sailing, the prevailing winds along the coast of New England and Canada blow from the southwest, meaning ships sail downwind to go east. As such, the northeastern stretches were said to be "Down East" in relation to major western cities such as Boston. Correspondingly, sailors spoke of going "up to Boston" from Down East ports, a phrase still common in Maine, despite the fact that Boston is around fifty miles to the south of Maine. The term can be used as an adverb, adjective, or noun. The Oxford English Dictionary traces the earliest known use in print to 1825. The phrase "down-easter", meaning a person from "Down East", appeared in print in 1828. 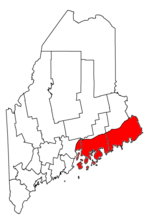 The phrase "Down East" is used in several ways. Most broadly, it refers to areas from northeastern New England into Canada's Maritime Provinces. Sargent F. Collier wrote that Down East extended from Maine into Canada as far as Chaleur Bay. This area is similar to the boundaries of the historical French colony of Acadia; Collier regarded this as a cultural legacy of the former colony. According to Maine author John Gould, Down East is "a never-never land always east of where you are". The term is relational, with Boston being the traditional referent for determining what is "Down East". As such, sailors going from one port in Maine to another nearby may have said they were going "down Maine" or "east'ard", reserving "Down East" for farther points.

Within New England, "Down East" often refers specifically to Maine, especially the coastal areas. The phrase has widespread use in the state; Maine's largest monthly magazine is titled Down East. The term "Down East" provided the name for a prominent type of sailing ship developed in Maine in the later 19th century, the Down Easter. Down Easters were a modification of the earlier clipper, with new lines and rigging enabling it to carry substantially more cargo. Primarily used to transport wheat and other goods from California to European markets, Down Easters were characteristically built in Maine, and their captains often came from the state. A significant part of Maine's maritime legacy, they were among the last prominent sailing ships built before steamships came to dominate the industry.

In Maine, "Down East" may refer more narrowly to the easternmost section of the state along the Canada–US border. This area, also known as "Down East Maine" or "Downeast Maine", lies on the coast roughly between the Penobscot River and the border, including rural Hancock and Washington counties and the towns of Bar Harbor, Machias, Jonesport, and Eastport. This was among the last parts of the state settled by Europeans. Due to its thankless climate it saw little settlement by the French, and British colonists arrived only after French control ended in 1763. Initially attracted by the availability of land for farming, the early British settlers soon turned to fishing to survive; fishing remains a significant economic driver. Largely due to its inhospitable climate and remoteness, Down East Maine has remained one of the state's least developed areas.

In Canada, "Down East" typically refers to the Maritime Provinces: New Brunswick, Nova Scotia, and Prince Edward Island. Newfoundland and the Gaspé Peninsula of Quebec are sometimes included. The term gave its name to Down East fiddling, which developed in the Maritimes and has become one of the most prominent styles of Canadian fiddling. The style is closely associated with New Brunswick native Don Messer, who hosted a radio show on Prince Edward Island beginning in 1939 and had a wide influence over fiddle music in Canada. The Down East style is distinguished by simple playing and dance-ready rhythms.

All content from Kiddle encyclopedia articles (including the article images and facts) can be freely used under Attribution-ShareAlike license, unless stated otherwise. Cite this article:
Down East Facts for Kids. Kiddle Encyclopedia.