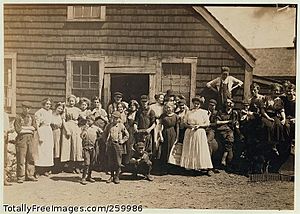 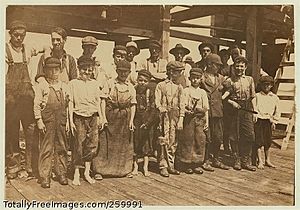 "Group of cutters, all of them working, factory #2. One of them, not the youngest, is Harold Whalen, 14 Tappen Ave. Makes $1.00 a day. Location: Eastport, Maine. Date Created/Published: 1911 August. Part of: Photographs from the records of the National Child Labor Committee (U.S.)"

The native Passamaquoddy Tribe has called this area home for at least 10,000 years. Some archeologists estimate the habitation at 20,000 years. The first known European contact was the St. Croix colony founded by the French explorer Samuel de Champlain in 1604. Near present-day Calais, the unsuccessful Saint Croix Island Acadia settlement predates the first successful English settlement at Jamestown, Virginia, by three years. On June 25, 1604, Champlain and his men spent a long and severe winter on St. Croix Island with no fresh water and diminished supplies. Two-fifths of the men died of scurvy, and the colony moved across the Bay of Fundy to Port Royal in present-day Nova Scotia.

Fishermen and traders visited the area in the 17th century. Moose Island was first settled in 1772 by James Cochrane of Newburyport, Massachusetts, who would be joined by other fishermen from Newburyport and Portsmouth, New Hampshire. On February 24, 1798, Eastport was incorporated as a town from Plantation Number 8 PS by the Massachusetts General Court, and named for being the easternmost port in the United States. Lubec, on the mainland, was set off and incorporated as a town on June 21, 1811.

From 1807 to 1809, the town was a center of extensive two-way smuggling during the Embargo Act imposed by President Thomas Jefferson. In 1809, Fort Sullivan was erected atop a village hill, but it was captured by a British fleet under command of Sir Thomas Hardy on July 11, 1814, during the War of 1812 as part of the initiative to establish the colony of New Ireland. England claimed that Moose Island was on the British side of the international border which had been determined in 1783. Nevertheless, the town was returned to United States' control in 1818. The boundary between the U. S. and Canada in the area remained disputed until settled by the Webster–Ashburton Treaty of 1842. Eastport would be incorporated as a city on March 18, 1893.

Farms produced hay and potatoes. Industries included a grain mill, box factory and carding mill. But the island's economy was primarily directed at the sea. With tides of about 25 feet (7.6 m), Eastport's spacious harbor remained ice-free year round. The first sardine factory was built here about 1875. The population grew with the emergence of the sardine fishery and related canning businesses, which studded the shoreline by the end of the 19th century. By 1886, the town contained 13 sardine factories, which operated day and night during the season, and produced approximately 5,000 cases per week. About 800 men, women and children worked in the plants. But the industry would decline, and many people moved away. Indeed, the city went bankrupt in 1937. In 1976, the Groundhog Day Gale destroyed many structures along the waterfront. Today, catching fish remains the principal industry, although tourism has become important as well.

Eastport is a port of entry. An international ferry crosses to Deer Island, New Brunswick, during the summer months. Each 4th of July, the city becomes a destination for thousands of celebrants. Navy ships have docked there during the 4th of July celebration for many years. Eastport celebrated its bicentennial in 1998. Each September, the city hosts the annual Maine Salmon Festival in the historic downtown district. 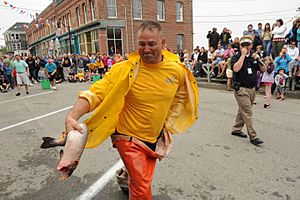 Sailor from USS Nitze competes in the cod race during Fourth of July celebration in 2011.

Independence Day in Eastport includes "Old Home Week", which is the celebration of the birth of both Canada and the United States. The celebrations traditionally begin on Canada Day and runs through U.S. Independence Day, it is actually a celebration of the birth of two nations. Eastport hosts the largest Fourth of July celebration in Maine. Events include the Grand Independence Parade (with considerable participation of its Canadian neighbors), fireworks over the Bay of Fundy, free entertainment at Overlook Park, greasy pole and water sports, antique car show, and contests and games for all ages with prizes. Since 1905, U.S. Navy and U.S. Coast Guard ships have made a port call over the 4th and provided free tours.

U.S. Navy ships which have visited the port of Eastport on the 4th of July include:

Beginning in 2004, Eastport began the new year with the drop of a sardine and maple leaf.

Old Sow, the largest tidal whirlpool in the Western Hemisphere, sits on the international boundary between Eastport and Deer Island.

This climatic region is typified by large seasonal temperature differences, with warm to hot (and often humid) summers and cold (sometimes severely cold) winters. According to the Köppen Climate Classification system, Eastport has a humid continental climate, abbreviated "Dfb" on climate maps.

There were 670 households of which 16.9% had children under the age of 18 living with them, 41.5% were married couples living together, 9.1% had a female householder with no husband present, 2.4% had a male householder with no wife present, and 47.0% were non-families. 40.1% of all households were made up of individuals and 19.1% had someone living alone who was 65 years of age or older. The average household size was 1.93 and the average family size was 2.56.

There were 750 households out of which 22.1% had children under the age of 18 living with them, 43.1% were married couples living together, 12.0% had a female householder with no husband present, and 40.7% were non-families. 32.7% of all households were made up of individuals and 14.3% had someone living alone who was 65 years of age or older. The average household size was 2.14 and the average family size was 2.69.

All content from Kiddle encyclopedia articles (including the article images and facts) can be freely used under Attribution-ShareAlike license, unless stated otherwise. Cite this article:
Eastport, Maine Facts for Kids. Kiddle Encyclopedia.