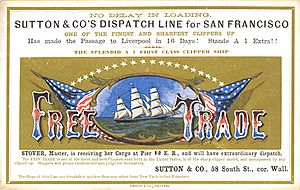 A clipper was a very fast sailing ship of the 19th century. The word "clipper" comes from a word meaning: "fast". Clippers had several masts and a square rig. They were quite narrow for their length.

Clipper ships were mostly made in British and American shipyards, but France, the Netherlands and other countries also made some. Clippers sailed all over the world, especially on the trade routes between the United Kingdom and its colonies in the east, in trans-Atlantic trade, and the New York-to-San Francisco route round Cape Horn during the California Gold Rush. Dutch clippers were built beginning in 1850s for bringing tea to Europe and taking passengers to and from Java.

Origin and usage of "clipper"

The term "clipper" most likely derives from the verb "clip", which in former times meant, among other things, to run or fly swiftly. Dryden, the English poet, used the word "clip" to describe the swift flight of a falcon in the 17th century when he said "And, with her eagerness the quarry missed, Straight flies at check, and clips it down the wind." The ships appeared to clip along the ocean water. The term "clip" became synonymous with "speed" and was also applied to fast horses and sailing ships. "To clip it," and "going at a good clip," are familiar expressions to this day. 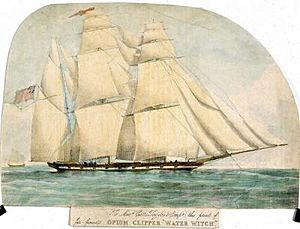 While the first application of the term "clipper" in a nautical sense is by no means certain, it seems to have had an American origin when applied to the Baltimore clippers of the late 18th century. When these vessels of a new model were built, which were intended to "clip" over the waves rather than plough through them, the improved type of craft became known as "clippers" because of their speed.

A clipper is often confused with a windjammer, but they are two completely different types of ship. Clippers were optimized for speed only and carrying highly priced cargo on small quantities, such as tea, spices or opium; a windjammer is a large sailing ship optimized for cargo capacity, ease of handling and carrying low priced bulk cargo, such as grain, fertilizers or lumber. Whereas clippers had very short lifespans - most were scrapped after only two decades of service, windjammers could have 50+ years' service life, and several windjammers are still today in use as school ships. 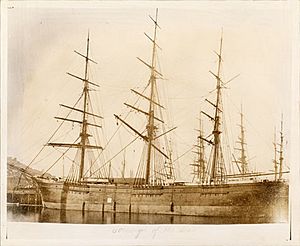 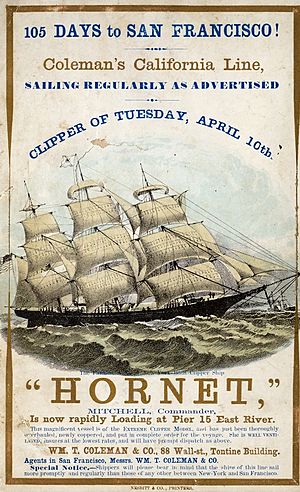 Hornet – an American clipper ship of the 1850s

The first ships to which the term "clipper" seems to have been applied were the Baltimore clippers. Baltimore clippers were topsail schooners developed in the Chesapeake Bay before the American Revolution, and which reached their zenith between 1795 and 1815.

The Flying Cloud was a clipper ship that set the world's sailing record for the fastest passage between New York and San Francisco, 89 days 8 hours. She held this record for over 100 years, from 1854 to 1989.

Among the most notable clippers were the China clippers, also called Tea clippers or Opium clippers, designed to ply the trade routes between Europe and the East Indies. The last example of these still in reasonable condition was Cutty Sark, preserved in dry dock at Greenwich, United Kingdom. Damaged by fire on 21 May 2007 while undergoing conservation, the ship was permanently elevated three meters above the dry dock floor in 2010 as part of a plan for long-term preservation.

Clippers were built for seasonal trades such as tea, where an early cargo was more valuable, or for passenger routes. The fast ships were ideally suited to low-volume, high-profit goods, such as tea, opium, spices, people, and mail.Competition among the clippers was public and fierce, with their times recorded in the newspapers. The ships had short-expected lifetimes and rarely outlasted two decades of use before they were broken up for salvage.

Decline in the use of clippers started with the economic slump following the Panic of 1857 and continued with the gradual introduction of the steamship.

Departures of clipper ships, mostly from New York and Boston to San Francisco, were advertised by clipper ship sailing cards. These cards, slightly larger than today’s postcards, were produced by letterpress and wood engraving on coated card stock. Most clipper cards were printed in the 1850s and 1860s, and represented the first pronounced use of color in American advertising art.

Relatively few (perhaps 3,500) cards survive today. With their stunning appearance, rarity, and importance as artifacts of nautical, Western, and printing history, clipper cards are highly prized by both private collectors and institutions.

All content from Kiddle encyclopedia articles (including the article images and facts) can be freely used under Attribution-ShareAlike license, unless stated otherwise. Cite this article:
Clipper Facts for Kids. Kiddle Encyclopedia.