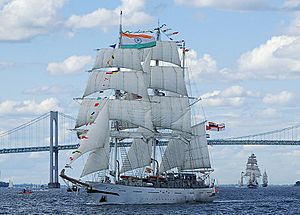 INS Tarangini, a sailing ship in service with the Indian Navy.

A sailing ship is a big boat with sails which catch the wind. The wind pushes the boat along. A sailing ship had a rig of at least three masts, square rigged on all of them. The great days of sailing ships was from around the 15th century to the middle of the 19th century. They were very important for trade as well as for war. All large boats became known as "ships", so when steam power was invented people talked about "steam ships" to distinguish them from "sailing ships".

Small boats with sails are called "yachts" or sailboats. They are used today for leisure activities.

All content from Kiddle encyclopedia articles (including the article images and facts) can be freely used under Attribution-ShareAlike license, unless stated otherwise. Cite this article:
Sailing ship Facts for Kids. Kiddle Encyclopedia.