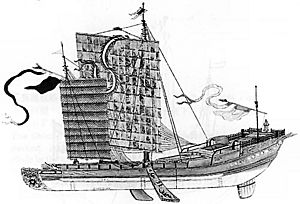 A junk from the 13th Century, Song Dynasty

Junk is a type of ancient Chinese sailing ship that is still in use today. Junks were used as seagoing vessels as early as the 2nd century AD and developed rapidly during the Song Dynasty (960–1279). The first records of junks can be found in references dating to the Han Dynasty (220 BCE-200 CE). They evolved in the later dynasties, and were used throughout Asia for extensive ocean voyages.

Junks were created during the Song Dynasty (960-1129) They were used during the 2nd century. They were found throughout South East Asia and India. They were mostly found in China and most famously in Hong Kong. Found more broadly today is a growing number of modern recreational junk-rigged sailboats.

It is considered as one of the most efficient ship designs. For long travels with few crew, the simplicity of the junk rig in terms of construction, maintenance and handling makes it an important alternative to more other designs. Most notably the safety that follows from extremely simple reefing, which is particularly important with few crew and bad weather conditions, this minimizes the need to work on deck while exposed to bad weather. Simple construction means lower cost and simpler repairs.

The term junk may be used to cover many kinds of boat—ocean-going, cargo-carrying, pleasure boats, live-aboards. They vary greatly in size and there are significant regional variations in the type of rig, however they all employ fully battened sails.

All content from Kiddle encyclopedia articles (including the article images and facts) can be freely used under Attribution-ShareAlike license, unless stated otherwise. Cite this article:
Junk (ship) Facts for Kids. Kiddle Encyclopedia.