Besides being a major political and economic centre to the state, the city is also the main gateway to many of the state's tourist destinations. Even though the city is not spared from modernity and development, Kuala Terengganu still has strong Malay influences that are intermixed with other cultures from its long history as a port. 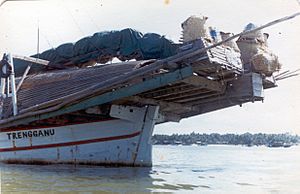 A boat anchored in Kuala Terengganu

Kuala Terengganu was a major fishing port and one of the important trading ports in Malaya. The chief exports were coffee, gambier, gold, ivory, pepper and tin. They were mainly traded for rice, tobacco, cotton goods and opium.

The economic sector in Kuala Terengganu is mostly made up of small-scale manufacturing industries such as the traditional textile making, local food industries, arts and craft factories, and agriculture, with most of them centred around residential areas or villages.

There are two main industrial estates for bigger industries. Factories such as those that produce bricks or timber products are located further away from the main city areas.

As the principal gateway for tourists to the state, tourism remains as one of the major economic sources for Kuala Terengganu. 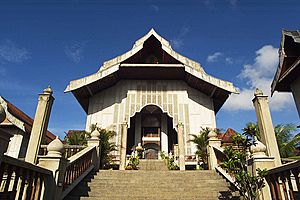 The Terengganu State Museum is located in Kampung Losong. It is acclaimed to be one the largest museum complexes in Malaysia and South East Asia with an area of 27 hectares. The architecture is based on the traditional Terengganu Malay house known as rumah tele. It has eight different galleries and other open air exhibits such as Petronas Gallery, Maritime Gallery, Islam Gallery, exhibits of traditional Terengganuese houses, and many others. The museum is also the home of the Terengganu Inscription Stone, the oldest artefact with Jawi writing in this country. 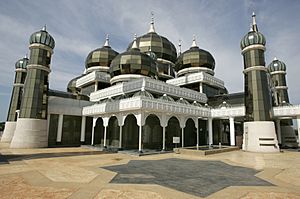 Near the museum is the Islamic Heritage Park. This park is an educational entertainment park that showcases various replicas of famous mosques from all over the world. Among the replicas are Al-Masjid al-Haram, Qol Sharif Mosque, and Masjid Negara. The Crystal Mosque is also located here. Boat cruises services along Terengganu River are also provided for the visitors. 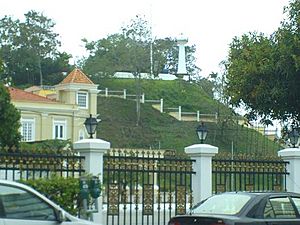 A small hill known as Bukit Puteri can be found nearby to Pasar Payang. The hill is about 200 metres high, located near the banks of Terengganu River. Because of its strategic location, it was used as a fortification by the sultans of the state. Old artefacts, a graveyard, and monuments can be found on top of the hill. During the Islamic holy month of Ramadan, a century-old brass bell known as genta is rung to signify that it is time for iftar, or the end of the fasting on that day. 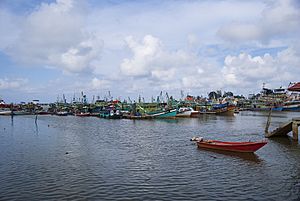 Pulau Duyong is a river island located at the Terengganu River estuary. It is popularly known for its traditional boat making activities. Pulau Duyong also contains a historical monument known as Kota Lama Duyong (Duyong Old Fort). It is a traditional Malay house built with local and European elements.

Kuala Terengganu has various places for recreation. Amongst the most prominent one is Batu Buruk Beach, located not far from the city centre. The beach has many amenities and facilities for visitors, such as horse riding, horse carriage rides and kite flying. However, visitors are recommended not to swim in the waters due to strong currents.

The Chinatown of Kuala Terengganu is one of the main tourist attractions. This settlement is a row of shop-houses from the prewar era, with some of them dating back from the 1700s. Most of the houses are 2 stories high, mainly made of bricks or concrete, with wooden flooring for the second storey. Some have kept the intricate wood carving windows, huge heavy wooden front doors, and olden plaques. 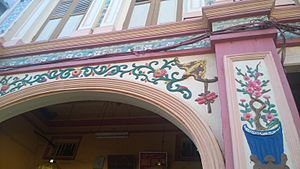 The centuries-old buildings now consists of various shops, local coffee shops, offices, souvenir shops, restaurants and other services. It is home to two Chinese temples, Ho Ann Kiong and Tien Hou Kong, which were built in 1801 and 1896. 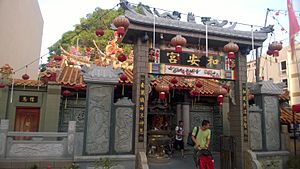 Another landmark is the 19th-century Low Tiey water well, erected in 1875. After years and years, it still supplies clean water to Chinatown's residents. Many of the buildings here have undergone restoration or beautification programmes to make them more appealing, but without destroying the heritage value. 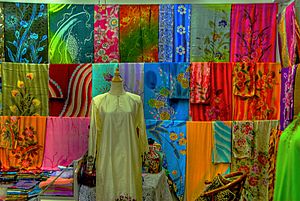 The Abidin Mosque is Kuala Terengganu's old state royal mosque built between 1793 and 1808. It is popularly known as Masjid Putih (White Mosque). The mosque is also the location of the Royal Mausoleum.

Seberang Takir is a fishing village situated on the northern bank of Terengganu River estuary. Here, visitors can see for themselves many cottage industries such as the producing of keropok lekor (a local fish cracker), batik printing, and drying salted fish, and the making of belacan (shrimp paste).

All content from Kiddle encyclopedia articles (including the article images and facts) can be freely used under Attribution-ShareAlike license, unless stated otherwise. Cite this article:
Kuala Terengganu Facts for Kids. Kiddle Encyclopedia.