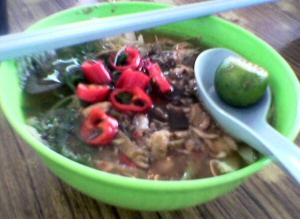 A bowl of Ipoh laksa

Laksa is a popular spicy noodle soup from Peranakan culture. Curry laksa (sometimes called just laksa) is a coconut soup made with prawns, beef, bean sprouts and chili. It is very spicy but can be made milder by leaving out some of the chilis.

Laksa is a popular food in Malaysia. A well-known Asam Laksa can be found in Air Itam, Penang.

The type of laksa is based upon the soup base employed in its recipe; either rich and savoury coconut milk, fresh and sour asam (tamarind, gelugur or kokum), or the combination of the two. There are three basic types of laksa: curry laksa, asam laksa, and other variant that can be identified as either curry or asam laksa. Curry laksa is a coconut milk curry soup with noodles, while asam laksa is a sour, most often tamarind-based, soup with noodles. Thick rice noodles also known as laksa noodles are most commonly used, although thin rice vermicelli (bee hoon or mee hoon) are also common, and some recipes might create their own rice noodle from scratch. Some variants might use other types of noodles; Johor laksa for example uses spaghetti, while a fusion recipe might use Japanese udon noodle. 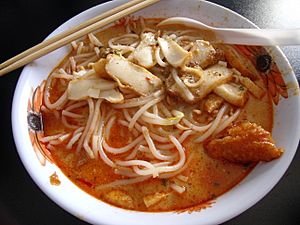 Curry laksa (in many places referred to simply as "laksa") is a coconut-based curry soup. The main ingredients for most versions of curry laksa include bean curd puffs, fish sticks, shrimp, and cockles. Some vendors may sell chicken laksa. Laksa is commonly served with a spoonful of sambal chilli paste and garnished with Vietnamese coriander, or laksa leaf, which is known in Malay as daun kesum.

This is usually known as curry mee in Penang rather than curry laksa, due to the different kind of noodles used (yellow mee or bee hoon, as opposed to the thick white laksa noodles). Curry mee in Penang uses congealed pork blood, a delicacy to the Malaysian Chinese community.

The term "curry laksa" is more commonly used in Kuala Lumpur and Singapore. Laksa is quite popular in Singapore, and curry laksa or nyonya laksa can be simply served as plain laksa, with just noodles and gravy, or with additional ingredients. Singaporean curry laksa ranked in number 44th of CNN World's 50 best foods. Recently, several modern twist of curry laksa has been developed, such as laksa yong tau foo which is stuffed tofu laksa, and a premium upgrade of lobster laksa.

In Indonesia, most of laksa variants are coconut milk-based soup, thus can be categorized into curry laksa. Common spices include turmeric, coriander, candlenut, lemongrass, garlic, shallot, and pepper cooked in coconut milk. Widely available daun kemangi (Indonesian lemon basil leaf) is commonly used instead of daun kesum. Bihun or thin rice vermicelli is most commonly used noodle instead of thick rice noodle, and some recipe might add slices of ketupat or lontong rice cake. Bogor laksa uses ground oncom into its soup.

Variants of curry Laksa include: 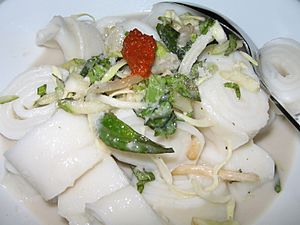 Laksam is a popular dish in Kelantan and Terengganu 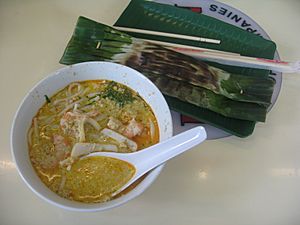 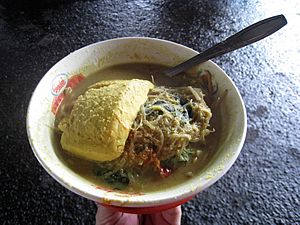 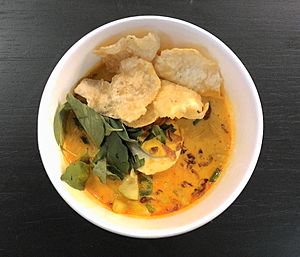 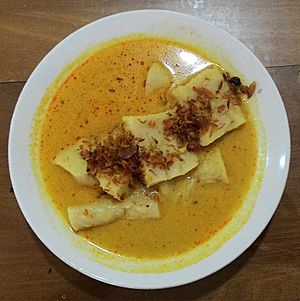 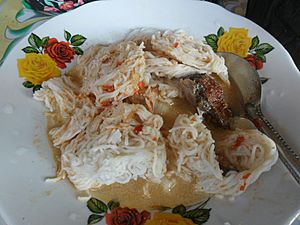 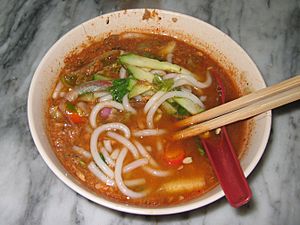 A bowl of Penang laksa, a variant of Asam laksa.

Asam laksa is a sour, fish and tamarind-based soup. Penang Asam Laksa listed at number 26th on World's 50 most delicious foods compiled by CNN Go in 2011. Asam is the Malay word for any ingredients that makes a dish tastes sour (e.g. tamarind, gelugur or kokum). Laksa typically uses asam keping, known as kokum in the English speaking world, which is a type of dried slices of sour mangosteens. The modern Malay spelling is asam, though the spelling assam is still frequently used.

All content from Kiddle encyclopedia articles (including the article images and facts) can be freely used under Attribution-ShareAlike license, unless stated otherwise. Cite this article:
Laksa Facts for Kids. Kiddle Encyclopedia.