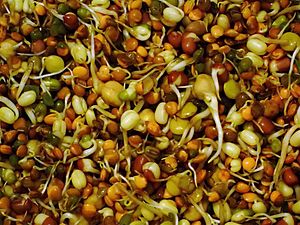 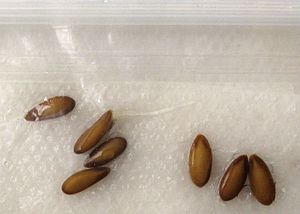 Sprouting is the natural process by which seeds or spores germinate and put out shoots, and already established plants produce new leaves or buds or other newly developing parts[example needed] experience further growth.

In the field of nutrition, the term signifies the practice of germinating seeds (e.g., mung beans, sunflower seeds, etc.) to be eaten raw or cooked, which is considered highly nutritious. The term can also be used for hair growth, and in a figurative sense it can mean 'something appearing suddenly'. 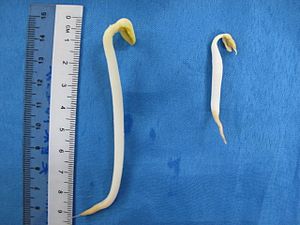 Soybean sprout next to a smaller mung bean sprout

All viable seeds can be sprouted, but some sprouts should not be eaten raw.

Bean sprouts are a common ingredient across the world. They are particularly common in Eastern Asian cuisine. It typically takes one week for them to become fully grown. The sprouted beans are more nutritious than the original beans, and they require much less cooking time. There are two common types of bean sprouts:

Common sprouts used as food include:

Although whole oats can be sprouted, oat groats sold in food stores, which are dehulled and have been steamed or roasted to prevent rancidity, will not sprout. Whole oats may have an indigestible hull which makes them difficult or even unfit for human consumption. In the case of rice, the husk of the paddy is removed before sprouting. Brown rice is widely used for germination in Japan and other countries, becoming germinated Brown Rice (GBR). Quinoa in its natural state is very easy to sprout, but when polished, or pre-cleaned of its saponin coating (becoming whiter), it loses its power to germinate.

Sprouts of the family Solanaceae (tomato, potato, paprika, and aubergine/eggplant) and the family Polygonaceae (rhubarb) cannot be eaten raw, as they can be poisonous. Some sprouts can be cooked to remove the relevant toxin, while others cannot.

With all seeds, care should be taken that they are intended for sprouting or human consumption, rather than sowing. Seeds intended for sowing may be treated with toxic chemical dressings. Several countries, such as New Zealand, require that some varieties of imported edible seed be heat-treated, thus making it impossible for them to sprout. 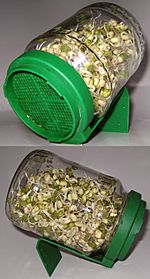 The germination process takes a few days and can be done at home manually, as a semi-automated process, or industrially on a large scale for commercial use.

Typically the seeds are first rinsed to remove soil, dirt and the mucilaginous substances produced by some seeds when they come in contact with water. Then they are soaked for from 20 minutes to 12 hours, depending on the type and size of the seed. The soaking increases the water content in the seeds and brings them out of quiescence. After draining and then rinsing seeds at regular intervals, the seeds then germinate, or sprout.

For home sprouting, the seeds are soaked (big seeds) or moistened (small), then left at room temperature (13 to 21 °C or 55 to 70 °F) in a sprouting vessel. Many different types of vessels can be used as a sprouting vessel. One type is a simple glass jar with a piece of cloth or nylon window screen secured over its rim. "Tiered" clear-plastic sprouters are commercially available, allowing a number of "crops" to be grown simultaneously. By staggering sowings, a constant supply of young sprouts can be ensured. Any vessel used for sprouting must allow water to drain from it, because sprouts that sit in water will rot quickly. The seeds swell, may stick to the sides of the jar, and begin germinating within a day or two.

Another sprouting technique is to use a pulse drip method. The photo below on the right shows crimson clover sprouts grown on 1/8" urethane foam mats. It's a one-way watering system with micro-sprinklers providing intermittent pulses of fresh water to reduce the risk of bacterial cross-contamination with Salmonella and E. coli during the sprouting process. 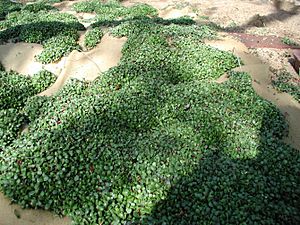 Crimson clover sprouts grown on 1/8" urethane foam mats with a pulse drip technique. Four micro-sprinklers cycle pulsing continuously over a 7-day period, each putting out about 1/2 gallon per hour. The four micro-sprinklers were each fitted with an LPD to keep the lines fully charged between pulses.

Sprouts are rinsed two to four times a day, depending on the climate and the type of seed, to provide them with moisture and prevent them from souring. Each seed has its own ideal sprouting time. After three to five days the sprouts will have grown to 5 to 8 centimetres (2 to 3 in) in length and will be suitable for consumption. If left longer they will begin to develop leaves, and are then known as baby greens. A popular baby green is a sunflower after 7–10 days. Refrigeration can be used as needed to slow or halt the growth process of any sprout.

Mung beans can be sprouted either in light or dark conditions. Those sprouted in the dark will be crisper in texture and whiter, as in the case of commercially available Chinese Bean Sprouts, but these have less nutritional content than those grown in partial sunlight. Growing in full sunlight is not recommended, because it can cause the beans to overheat or dry out. Subjecting the sprouts to pressure, for example, by placing a weight on top of them in their sprouting container, will result in larger, crunchier sprouts similar to those sold in grocery stores.

A very effective way to sprout beans like lentils or azuki is in colanders. Soak the beans in water for about 8 hours then place in the colander. Wash twice a day. The sprouted beans can be eaten raw or cooked.

Sprouting is also applied on a large scale to barley as a part of the malting process. Malted barley is an important ingredient in beer and is used in large quantities. Most malted barley is widely distributed among retail sellers in North America.

Many varieties of nuts, such as almonds and peanuts, can also be started in their growth cycle by soaking and sprouting, although because the sprouts are generally still very small when eaten, they are usually called "soaks".

All content from Kiddle encyclopedia articles (including the article images and facts) can be freely used under Attribution-ShareAlike license, unless stated otherwise. Cite this article:
Sprouting Facts for Kids. Kiddle Encyclopedia.