Quinoa (Spanish: quinua, from Quechua: kinwa) is a species of goosefoot (Chenopodium). It is a grain-like crop grown primarily for its edible seeds.

Quinoa is not a real cereal, or grain, as it is not a member of the grass family. As a chenopod, quinoa is closely related to species such as beets, spinach, and tumbleweeds. Its leaves are also eaten as a leaf vegetable, much like amaranth. Quinoa greens are not widely available for purchase. Quinoa gives high quality protein and other nutrients. It has been called a 'superfood'. 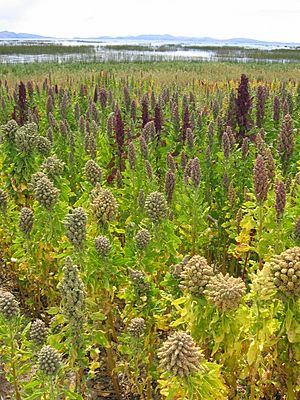 Quinoa is not a grass, but rather a pseudocereal botanically relative to spinach and amaranth, and originated in the Andean region of northwestern South America. It was first used to feed livestock 5.2-7 thousand years ago, and for human consumption 3-4 thousand years ago in the Lake Titicaca basin of Peru and Bolivia.

Today, almost all production in the Andean region is done by small farms and associations. Its cultivation has spread to more than 70 countries, including Kenya, India, the United States, and several European countries.

As a result of increased popularity and consumption in North America, Europe, and Australasia, quinoa crop prices tripled between 2006 and 2013.

All content from Kiddle encyclopedia articles (including the article images and facts) can be freely used under Attribution-ShareAlike license, unless stated otherwise. Cite this article:
Quinoa Facts for Kids. Kiddle Encyclopedia.