Lake Titicaca (Quechua: Titiqaqa Qucha, "Titiqaqa Lake") is a large, deep lake in the Andes mountains. The eastern part is in Bolivia and the western part of it is in Peru. It is the largest lake in South America.. Lake Titicaca is at 3,812 m (12,507 ft) above sea level. It is often called the "highest navigable lake" in the world. It means that it is the highest lake that boats use for trade. There are many other lakes in the world that are higher. The lake has 41 islands. Some of the islands are home to many people.

Lake Titicaca is home to more than 530 species of water animals. Several threatened species such as the huge Titicaca water frog and the Titicaca grebe, a bird which cannot fly, only live in or near the lake..

Since 2000, the water level of Lake Titicaca has gone down. This is because of shorter rainy seasons and the melting of glaciers. The Global Nature Fund (GNF) says that the natural life in and around Lake Titicaca is under threat from water pollution and the introduction of new species by humans. 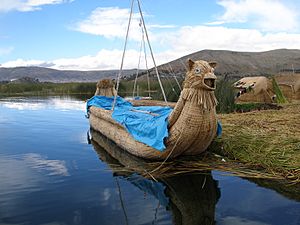 A reed boat on Lake Titicaca 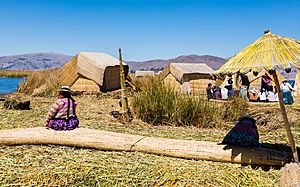 The "Floating Islands" are small islands made by the Uros (or Uru) people. They use layers of cut totora, a thick reed that grows in Lake Titicaca. The Uros make the islands by continuously bending over the reeds that grow in the lake.

Legend says that the Uru people came from the Amazon river area, and moved to Lake Titicaca. The local people did not allow them to have their own land. They then built the reed islands, which could be moved into deep water or to different parts of the lake for safety.

The islands are a golden colour. Many are about 15 by 15 m (50 by 50 ft) big. The largest are about half the size of a football field. Each island has a few houses. The people living together on an island are usually all related. Some of the islands have watchtowers and other buildings, also made out of reeds.

As of 2011[update], about 1,200 Uros lived on 60 islands. They are mostly in the west corner of the lake near Puno, a large port town in Peru. The islands have become one of Peru's tourist attractions. This means that the Uros can earn money by bringing visitors to the islands by motorboat and selling crafts. 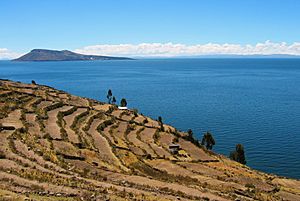 Amantani is another small island on Lake Titicaca. The people living here speak the Quechua language. About 4,000 people live in 10 communities on the nearly circular 15 km2 (6 sq mi) island. It has two mountain peaks, called Pachatata (Father Earth) and Pachamama (Mother Earth). Both peaks have ancient ruins on the top. The hillsides planted with wheat, potatoes, and vegetables. Most of the small fields are worked by hand. Long stone fences divide the fields, and cattle and sheep also graze on the hillsides. 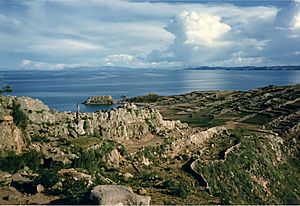 Taquile is a hilly island located 45 km (28 mi) east of Puno. About 2,200 people live here. It is narrow and long and was used as a prison during the Spanish Colony and into the 20th century. In 1970, it became property of the Taquile people, who have inhabited the island since then. There are pre-Inca ruins on the highest part of the island. Taquile is famous for its weaving and knitting. "Taquile and Its Textile Art" were honoured by UNESCO with the label "Masterpieces of the Oral and Intangible Heritage of Humanity".

Isla del Sol (Spanish for "island of the sun") is one of the largest islands of the lake. It is a rocky, hilly island. There are no cars or paved roads on the island. About 800 families live here. There are over 180 ruins on the island. Most of these are from the Inca period around the 15th century AD. Among the ruins on the island are the Sacred Rock, a labyrinth-like building called Chicana, Kasa Pata, and Pilco Kaima. The island is also mentioned in Inca mythology.

Isla de la Luna (Spanish for “island of the moon”) lies east of the bigger Isla del Sol. Legends say that this is where Viracocha told the moon to rise. Archaeological excavations show that the Tiwanaku peoples (around 650–1000 AD) built a large temple on the Island of the Moon. The buildings on the island today were built by the Inca on top of the earlier Tiwanaku ones.

Suriki lies in the Bolivian part of Lake Titicaca. Suriki is the last place where they still make reed boats.

All content from Kiddle encyclopedia articles (including the article images and facts) can be freely used under Attribution-ShareAlike license, unless stated otherwise. Cite this article:
Lake Titicaca Facts for Kids. Kiddle Encyclopedia.